EXPECTATIONS: Here at Current Releases, we like to come into films with open minds, and in the case of certain politically charged films, we realize the importance of not prejudging quality based on politics. But what do you do when the politics ARE the film? The selling point of this movie is that the characters are played by actual active-duty Navy SEALs. The trailer alone lets you know this movie is saying LOOK HOW AWESOME THE NAVY IS GUYS THIS IS SO COOL. It's basically a two-hour version of the Yvan Eht Nioj episode of the Simpsons, except minus N*Sync. What the hell am I supposed to with that?

REALITY: One of the things people don't understand about how film criticism works is that critics judge movies by different standards depending on what the film is trying to accomplish. Romance movies are judged by romance standards, comedies are judged by comedy standards, etc. This being Oscar weekend, I felt it's important to bring that up because inevitably someone always throws a fit that "CRITICS ONLY LIKE THEM FANCY-PANTS OSCAR DRAMAS!" Well, no. We don't. We like slapstick movies and shoot-em-ups, we just like good ones. And, quite frankly, we're not too big on the Oscar dramas this year, either. The reason I bring this up in regards to Act of Valor, however, is because this film presents a unique challenge for a critic. The question is, how do I approach this movie? If this were any other movie, I'd just be able to judge it as an action film, but I can't. I have to judge it for all the things it tries to be, and that includes being a recruitment video and a propaganda piece. 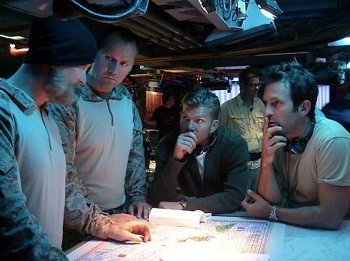 The A-Team?Unfortunately, the standards for those two don't get trotted out too often, so they're less rigid. Let's start by judging it on action-movie standards, because that's easiest. We all know who SEAL Team 6 is, right? They're the guys who killed Osama bin Laden, and they recently pulled off an insanely difficult rescue mission during the State-of-the-Union address. Well, this movie isn't about them. It's about about SEAL Team 7. (Note: That would actually be a brilliant idea for a comedy along the lines of The Other Guys or Almost Heroes. Someone call me about this.) There are two white-bread leaders in a brothers-in-arms relationship, and a handful of men under their command, including two token black guys. Normally this is where I list the names of the characters and the actors, but the SEALs in this film were required to remain anonymous. I don't really see the point of protecting their names once their faces have been in every movie theater in America, except to make this movie's IMDb page absolutely useless to me, but okay.

When a CIA agent is taken by a smuggler with possible terrorist ties, SEAL Team 7 is called in to rescue her, which they do. In doing so, they accidentally stumble upon a terrorist plot to sneak into America and detonate super-mega-sci-fi vest bombs across targets in America. Wait, there's a key word in that sentence you may have missed. That's the word accidental. In this universe, the biggest terrorist plot in the history of the world is unraveling, and apparently we only know about it because some dude picked up a cell phone. Wait, not just some dude. A NAVY SEAL. Years of careful planning and surveillance and gathering intel just gets the CIA agents an ass-kicking, and the only progress is made by shooting people and taking stuff off of their corpses, SEAL STYLE.

Anyway, apparently everybody and their brother is in on this plot to cause an economic crash in America, which doesn't even make any sense. There's only a handful of honest-to-Allah jihadists in this movie; the rest of them have literally nothing to gain from the downfall of American society. In fact, the film is less about a War on Terrorism and more about a War on Brown People. See, the point of this film is that basically anyone (who is not a US Soldier) can pose a threat to our security, and the opening lines even say so, that threats have camouflage. We can't accuse this film of racism, because it's not just Arabs that are the bad guys! Anyone can be a terrorist or a terrorist-enabler, even if they're a Jewish Russian Businessman! Or a Mexican Drug Cartel! Or The President of the United States! (Just kidding, the film doesn't go that far, but you know it wants to.) At this point, I'd like to remind you, I'm still analyzing its flaws as an action movie. I haven't even gone into the propaganda aspect yet. 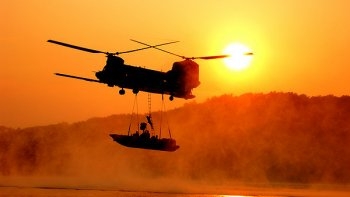 Apocalypse Now?There's some interesting cinematography going on here, I'll give it that. The extractions (set in parts of the South American jungle that luckily look exactly like the Florida everglades) and shootouts are sufficiently intense, and from an artistic standpoint, it's nice of directors Mike McCoy and Scott Waugh to take a no-holds-barred approach to the more violent sections of the narrative. Hell, they apparently used live ammunition in the filming, which I can't understand any movie studios' insurance signing off on. That said, I had to roll my eyes when entire scenes were filmed from first person, with the rifle scope filling the bottom-left corner of the screen, looking EXACTLY like a video game. For a film that's trying to pass itself off as being gritty and realistic to have slick, stylized Hollywood-esque action sequences seems almost counter-intuitive to what the point of the movie claims to be.

Clearly it is impossible to separate this film from the politics and message involved, which makes sense because this film literally started its life as a recruitment video. I will say in that regard it's not a particularly good one, because at no point in time did this film make me want to join the Navy. But then, I'm not the audience this is hoping to appeal to. The target for this film is A) Young people with a potential interest in the armed forces, and B) People currently in the Navy who are not part of the SEAL program. That second half confuses me. I may not understand how the Military works, but I get that being a SEAL is a pretty big deal. I would imagine that since their profile has been raised significantly in the past year, it should be easy to get people to sign up for the program, and I can't help but feel this movie's $18 million dollar budget could have been spent in a better way.

Regardless, because of this fact, every aspect of this movie has to be analyzed differently, because I know its primary goal is to be played in High School ROTC classrooms. Take, for example, the above-mentioned first-person-camera action scenes. You can argue that because they were literally shot through the helmet of a US Soldier, that the idea was to show what these scenes would be like through their eyes. That's a fair argument, but it's completely defeated by the fact that this movie had a marketing deal with Battlefield 3. They literally had a video game advertising their live-action video game in the hopes of snagging an obvious source of new recruits.

It's choices like this that make Act of Valor incredibly difficult to rate, because you have to understand that this is a unique cinematic experience. It's possible for a film to be both a propaganda piece and a work of art. Triumph of the Will and Birth of a Nation are considered some of the greatest films of all time, and those were made by literal Nazis and Klansmen. Now, I'm not going to say that Nazis are better at making propaganda films than we are, because I'm already going to be accused of hating America and ARE TROPS just by writing this. Whether this is a good film or not is irrelevant. I'm just saying, maybe in 2012, we shouldn't be making films I have to compare to Nazi Germany.

There's a reason I don't have guidelines to go off for this film like I would for a musical or a buddy-cop movie. It's because we haven't made any movies like this for a very long time, and I'm not quite sure why we needed to start now. This is a film that basically exists to tell you that the only reason you aren't being murdered right now while you read this is because of a Navy SEAL somewhere in the world. Maybe that's true, I don't know. But it's a little unfair to spend a whole movie telling us that and then end it with a poem telling us to live our lives without fear.

Do I think this movie is dangerous? Of course I do. Propaganda by its very definition is dangerous. It's certainly more dangerous than any video game. Being in war is not like playing a video game, and watching this movie is not like playing a video game either, as much as it wants us to think so. Video games are meant to be be fun. This is not a movie that is meant to be enjoyed: This is a movie whose purpose is literally to make the audience members want to kill people.

When I put it that way, you can see why I'm struggling to rate this like normal. If it were just an action film, I could be shallow and praise its cinematography while decrying its plot and acting. I could also point out how racist it is, this is something I do with films. But this isn't an action film. It's a war tool, plain and simple. The only people who this movie is intended for are the ones who can tell you how real it is or isn't. It's not really a terrible movie. It's just not a movie we ever should have seen.

MINORITY REPORT: I honestly don't know what the fuck this is, but every time a military branch makes a pop-culture recruitment tool, they usually turn out inferior products (see: that awful video game Army of One and 3 Doors Down's "Citizen/Soldier"), so I'm guessing Act of Valor is half as good as 1990's Navy SEALs, which itself was a 10th as good as Under Siege, which yields my predicted final score of 1.5/50. - Sean "Keanu Grieves" Hanson