The Watch; Step Up Revolution; Safety Not Guaranteed

EXPECTATIONS: Once upon a time, I would have scoffed at the very idea of going to see a Step Up film. "Dancing movies aren't real movies," a young Mr. Wade once said*. But all little film critics have to grow up sometime. CGI robot spectacles just aren't cutting it anymore, and I've come to learn that spectacle comes in many forms. Hell, the Footloose remake was one of last year's most entertaining movie-going experiences. So to Hell with computer wizardry and superhero platitudes, just show me some dancers doing things I know I could never do. That's all I'm asking. 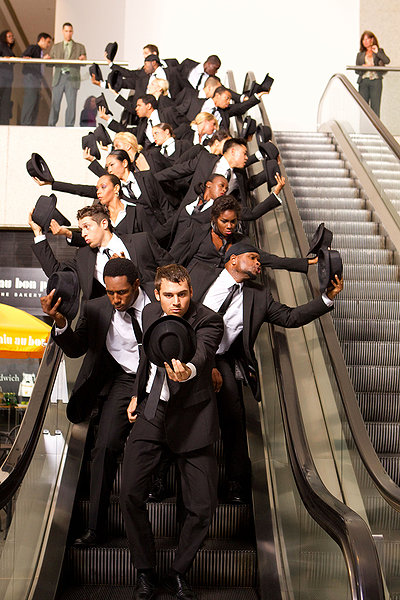 Commuters were outraged that the escalators had been dominated in the name of a fancy hat dance.REALITY: You get what you pay for. That's how I felt walking out of Step Up Revolution, a film that features a number of damn impressive dance routines and stunts, but fills in the gaps with the cinematic equivalent of dead air. I'm pretty sure nobody is looking for a Step Up film to include a riveting plot or nuanced acting, and I think the filmmakers know it, because everyone involved seems to be putting in the bare minimum of effort just so they can get us to the next crazy dance sequence.

Step Up 4 opens with an elaborately staged dance mob blocking traffic to capture their latest routine on video. The dance mob, cleverly named The Mob, is competing to win a $500,000 cash prize on YouTube, but The Mob is currently losing to a video of a sneezing cat. As Mob leaders Sean (Ryan Guzman) and Eddy (Misha Gabriel) plan their next event, Sean meets Emily Anderson (Kathryn McCormick), who just happens to be his boss' daughter. Emily's father (Peter Gallagher) runs a local resort in Miami, and is planning on building a new resort on top of the harbor community Sean calls home. The Mob recruits Emily to help them win the prize, but they quickly find international fame after staging a protest mob against the planned construction.

At this point in the story, The Mob either fails to find a way to discourage Anderson's plans or simply forgets that that's what they're supposed to be doing. It isn't made clear, because it seems like even the film loses interest with its own plot. Right around the scene in which The Mob invades Mr. Anderson's cocktail party to perform an ill-conceived, terrorism-themed protest dance, the film drops all pretenses that it's about anything but proving yourself through dancing. The dancing is what's important, which is a line repeated at least ten times, so it must be true. The dancing is what's important, even if it means neglecting the story you're trying to tell.

As long as you can convince a hundred people to dance at the mayor in a crowded shipping yard, nothing else is important. Not even subplots that would be treated as deadly serious in any other film. Emily's ultimate rejection from a prestigious dance school for being too rigid is brushed off without a second thought, as we see that she can clearly lead a dance mob through a successful routine. Sean's sister begging him to give up The Mob to apply for an entry level position at what may very well be a terrible job is a subplot that gets maybe two minutes of consideration before we're back to the flash mobs and wacky performance installations. Sean doesn't need to work customer service, he's doing just fine for himself servicing the hell out of these sick moves or however people say it. 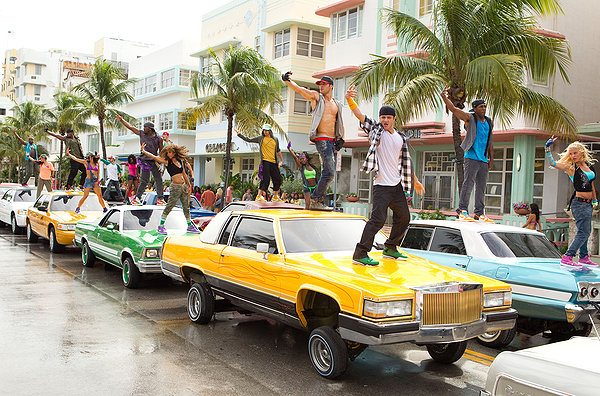 Commuters were outraged again when traffic was stopped in the name of a fancy colourful cars number.

Late in the film, and I'm talking minutes from the closing credits, we're introduced to a character named Moose (Adam Sevani). He pops and locks out of nowhere during the big dance finale, then when it's all over gets in Mr. Anderson's face and tells him it's all about the dancing. Then this exchange happens:

At this point, I'm convinced the film had completely and utterly given up any pretense of providing a conventional narrative. They can't be bothered to tell us anyone's name until a naming montage thirty minutes into the film, but suddenly we're introduced to a character so seemingly important that we have to have a conversation about his name. It's both maddening and hilarious. Step Up Re4lution is a film I'd kind of like to live in, if only so that I might encounter a character like Moose and chat with him over coffee about why Moose's name is Moose.

Aside from the excellent dance choreography, I did enjoy the fact that Step Up 4nnihilation is structured like an elaborate heist film. Each member of The Mob has a specific role to play, whether it be DJ, graffiti artist, choreographer, etc. Each dance event requires precision timing, planning and execution, with entrances and getaways accounted for. If only the plot supporting these dance heists had any legs to stand on; if only there had actually been a heist somewhere in this film. But then I guess it is all about the dancing; money is only ancillary to Sean and Eddy's plans until suddenly money is offered to them on a silver platter. Hey, far be it from me to tell a bunch of dance terrorists how to do their job.

*For the record, I'm pretty sure I never actually said this.

MINORITY REPORT: I really hope that the title of this movie refers to the fact that these guys spin around on their heads, like, a lot. Otherwise, what exactly is revolutionary about something we've seen three times before? - Martin R. "Vargo" Schneider