Valentine's Day... I Saw it Alone

EXPECTATIONS: I don't know why they want me to review Valentine's Day. I mean, everybody knows the holiday was invented in 1968 as an attempt by hippies to combat the bad vibes from the Vietnam War. After the war, the corporations picked up on the idea and spent the next forty years or so turning it into a token day for showing your significant other how much you care. Because, really, who the fuck does that the other 364 days of the year? Anyway, I expect my own personal Valentine's Day will be a day of... Wait, what? Seriously? There's a movie? What the fuck?

REALITY: Color me stupid, how was I supposed to know there was a movie called Valentine's Day coming out two days before Valentine's Day? It's not like I've got a girlfriend itching to drag me out to these things (hint, hint). Whatever, let's get to it... 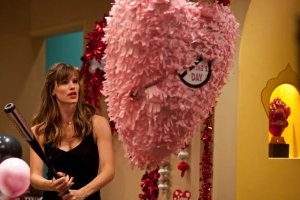 This is the most interesting image I could find from this movie.When done right, classic Hollywood style filmmaking is all about making you forget that you're watching a movie. You're meant to get so swept up in the story that the mechanics and facade of the film production are never visibly apparent. The editing is invisible, the actors disappear into their characters, the sets become real places, the relentless march of time slows to a crawl, and gravity even begins to loosen its grip on your flabby ass. Films like Casablanca, Singin' in the Rain and Robocop all pull these things off effortlessly. Valentine's Day wants so badly to be one of these films that it all but smacks you over the forehead with its cloying Hollywood veneer.

As the film begins, we're greeted with the cast credits, an alphabetical list of Hollywood's top stars, from Jessica Alba to Taylor Swift. This went on for so long that I figured they just decided to name everyone who lives in the Los Angeles area. Then I saw the final credit: Directed by Garry Marshall. Suddenly everything made sense, and I instantly knew what I was in for.

For those of you who don't watch the ABC Family Channel, Garry Marshall is Hollywood's top purveyor of romantic schmaltz. He's been doing it pretty consistently since the early 1960s, and his films almost always turn a profit. Put simply, if Nicholas Sparks' name isn't on it, Garry Marshall's name probably is. Which brings us to Valentine's Day.

It's pretty obvious what's going on here. The pitch probably went something like this:

What's truly aggravating about Valentine's Day isn't so much the film itself, but rather the not-so-elaborate ruse that Garry Marshall et al pull to steal your hard-earned money. By cramming this movie with every Hollywood actor who apparently had last summer off, we get to see a day in the life of nine-and-a-half different couples over the course of 125 insufferable minutes. I say 'nine-and-a-half', because somebody's cheating and I want my math to reflect the fact... Anyway, let's do that math, shall we? 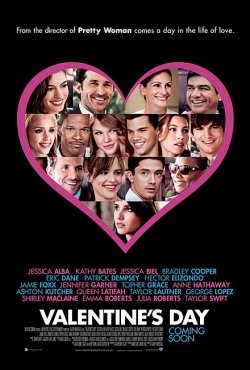 Even the poster is boring as hell. They couldn't even fit all of the main characters' faces on there!125 minutes / 19 main characters = 6.5 minutes of screen time per character. But then let's assume that each couple is on screen together at any given moment. That's still only approximately 13 minutes per couple, and that doesn't even take into account all the characters with no romantic attachment. 13 minutes is only enough time to tell the barest of stories, romantic or not. It's not even really enough time to establish characters; everyone might as well have been playing themselves. You could describe each couple's arc in one sentence, and they're all pretty much the same. "Character A wants to show his/her love to Character B but doesn't know how. To add variety, Character A may know damn well how to show his/her affection, but an unforeseeable circumstance stands in his/her way."

For Ashton Kutcher, that something is comedy genius Larry Miller, who shows up just long enough to piss in Kutcher's Cheerios. For most everyone else, it's being either a consummate bitch or a douche bag. Example: Topher Grace discovers that his girlfriend, Anne Hathaway, is a phone sex call girl and he can't get over the fact that he's from Muncie, Indiana. No, really, that is the central conflict in their story. But just to avoid you figuring out that there's not much here besides a series of vignettes, the film's story committee (seriously, this took three people to write) weaves each of these stories together such that every character seemingly knows every other character in some tenuous way. Imagine a rom-com version of Crash or Do the Right Thing and you're halfway to understanding what a fucking schizophrenic mess this movie is. The result feels like Garry Marshall's own personal vision of Los Angeles, where everybody knows everybody. I've been to Los Angeles; that shit just ain't true.

The only positive thing I can say for this film is that it'll be a great movie to know the next time you and your drinking buddies decide to play Six Degrees of Kevin Bacon. Come to think of it, why wasn't he in this movie?

b my valentine tonite? we could go see that new garry marshall movie 2gether?

meet me by the bike sheds if u r interested...