EXPECTATIONS: A young man discovers that he has mystical powers that he inherited from his famous and powerful parents. He then gets caught in the middle of a battle between the forces of good and evil while learning to harness his magical abilities. I know I've heard this one before... but where?

Anyway, Percy Jackson and the Olympians: The Lightning Thief (which, due to its insanely long title, will be hereafter referred to simply as Precious) is the latest picture from Chris Columbus, who directed the first two Harry Potter pictures until Alfonso Cuarón took over and showed everyone how it's really done. Hurt by how everyone was unimpressed with his unique ability to not get anyone to care about his characters, Columbus pouted and said "Screw you guys then! I'm going to start my own young adult fantasy adventure film series with great CG, great acting and an original story! In fact, forget the acting and the story!" 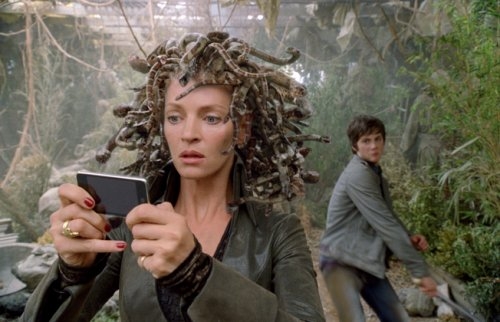 Precious, based on the novel by Sapphire Rick Riordan, is the story of a young man named Percy who lives with his slob of a stepfather and a mother who is deprived of any form of self-esteem. All is shit for Percy until he learns that he is the son of Poseidon, the god of the seas. I'm sure he thought this was pretty cool up until the part where he was taken to a training camp for demigods and learned that he was just another bastard child of the Greek gods. Yes, it seems as though Olympus is nothing more than a club for deadbeat fathers who, every once in a while, come down to Earth, knock up some gullible twit and bail back to the heavens before she starts with the whole "I'm pregnant" bit. They get away with this quite frequently because, seriously, who's gonna hit up a god for child support?

Daddy issues aside, the news turns Percy's world on its ear. Everything around him is no longer what it seems to be. His school teacher is actually a vicious harpy, his other teacher is the centaur Chiron and his sassy jive-talking token black friend is, well he's still the sassy jive-talking token black friend but now he's a satyr, which opens up the floodgates for a bunch of goat jokes. None of this was to have been revealed to Percy, because the gods like waiting until a child's fragile adolescent years to start fucking with them. But, you see, there is treachery afoot in Olympus.

Zeus' lightning bolt has been stolen, and Percy has been accused of being the thief. Of course! The kid who didn't even believe that the gods existed, let alone know that he was the descendant of one, is the one who snuck into Olympus and took it -- as opposed to the hundreds of bitter little demigod crumb snatchers at the demigod summer camp who all resent their parents. It's always the ones you least expect. Percy, along with his comic-relief goat friend and Annabeth, daughter of Athena and mandatory romantic interest, embarks on a cross-country quest to sneak into Hell, confront Hades (who is holding Percy's mother for ransom in exchange for the lightning bolt) and clear his good name before war breaks out between the gods over the location of Zeus' weapon of mass destruction.

Yeah, Precious has a bit of a Harry Potter vibe. It's an effect-loaded young adult fantasy adventure story with excitement, comedy and whimsy, except for the fact that, well, it doesn't have any of those things. It tries to have those things, but nothing really works.

First off, Precious has some of the worst performances I've seen so far this year. No one can act in this picture. Don't get me wrong, there are obviously good actors such as Uma Thurman and Pierce Brosnan, but none of them deliver good performances. Brosnan is barely in the picture and when he is he's mostly horse, which is kind of distracting. Thurman channels her Batman and Robin performance as Poison Ivy for Medusa and, like Brosnan, she gets eclipsed by the CGI, because her head of serpents is more entertaining to watch than her actual performance. Steve Coogan's performance as Hades is also terribly underwhelming. It's so unimpressive that there's a joke in the picture about how he makes for a bad Hades, but even that doesn't excuse the fact that he's horribly miscast. The only time he ever seems like the god of the underworld is when he goes all CG and transforms into a fiery demon with wings and horns. Again, an actor getting upstaged by the CG. 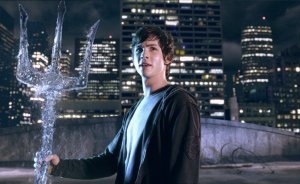 Percy is about to learn that ice sculptures don't make the best weapons.This leads me to the next problem, Precious relies entirely on its visuals. In Harry Potter we can still enjoy the film even when the picture isn't being overloaded with dragons and wizards and shit. We care about the characters and the drama of their lives. In Precious, as soon Percy isn't fighting a hydra or wrestling with the Minotaur, everything slows to a crawl. The characters are dull, the story isn't particularly gripping and the sets aren't exactly a sight to behold. Percy's adventure doesn't take him to the majestic Hogwarts or the beautiful Narnia. His battle with Medusa unfolds in what looks like a rundown roadside thrift shop, and the camp at which he and the other demigods train looks like it was built from sets that couldn't make the cut for the Dungeons and Dragons movie. The only thing at the training camp that piqued my interest was when we saw one of Percy's friends, Luke, playing Call of Duty: Modern Warfare on his PS3. I was like "Wow, I could be playing CoD right now too!" The only exotic locales that Percy visits on his journey are Las Vegas, which doesn't count because they didn't build it, and Hell, which, while impressive looking, is entirely CG. In Precious if it breathes, it must play second fiddle to what gets added in post-production. 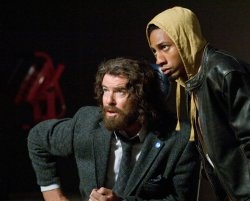 Nothing excites the kids of today more than a former James Bond star in a wheelchair.Also, in Precious no one is particularly interesting. Percy himself feels as if he was constructed from the leftover parts they use to make Eragon, Annabeth is just another aggressive-but-desirable love interest for the lead actor and, worst of all, Brandon T. Jackson, who I enjoyed in Tropic Thunder, makes a comedic 180 in this film as Grover, Percy's token black friend. Grover plays the sassy comedic relief between stints of dancing and chasing around white women (I wish I made that up). The whole bit is just painful to watch, because Jackson tries desperately to turn Precious' laugh-free script into something funny and strikes out every time. The fact that he has to do it while sporting a pair of goat legs just adds to the humiliation. Imagine if in The Hot Chick they actually tried to make Rachel McAdams play as Rob Schneider.

I could go on, but I think you get the idea. Plus it's simply too dull of a film for me to even make the extra effort to ridicule. I'd go so far as to say that it was the dullest film I've seen so far this year, and that's from someone who saw The Tooth Fairy. Small kids who have yet to hone their cinematic tastes will dig the lightweight comedy and mostly CG action, but if you've been around the block, why waste your time and money on this picture when there are so many other better fantasy films out there, like The Lord of the Rings, Harry Potter and Masters of the Universe?

MINORITY REPORT: I don't remember this movie very well. I went into a weird kind of daze and then the next thing I knew I'd bought a new iPod Touch with 64GB of storage and a new app that helps me defeat the evil forces of Hades. Yep! There's an app for that! -David "Data Core Devil" del Vacote III