Thursday, Apr 13, 2006 by Bob "BobServo" Mackey
UNDISPUTED FACT: If you listen to all of Abbey Road backwards, it DOESN’T SOUND VERY GOOD, NOW DOES IT, BUSTER

Today’s update wasn’t inspired by the recent pair of South Park episodes that mocked Family Guy. Instead, it was fueled by my own hatred of the show that really erupted when it came back for a fourth season, and proceeded to have some of the laziest and most annoying writing, ever. Mad propz to Evan “Pantsfish” Wade who I ripped off in unbelievable ways; his Truth Media Article about Kevin Smith was molested by me in an effort to produce more comedy.

How’s that for hypocrisy?

Side note: If you've ever listened to a Family Guy commentary track, you'd know that the way I portrayed Seth MacFarlane is what he is actually like.

With my last Daily Dirt, I asked for Chicken Sunday fan art. And I’d be goddamned if I didn’t get any! Let’s look at the entries:

Third place goes to pharmboy77, who portrays the cooking and hiring policies of Chicken Sunday. CLICK HERE TO WITNESS IT!

Second place goes to Eric Phillips, who produced both a BUMPER STICKER and a PROMOTIONAL POSTER for Chicken Sunday. Hey Eric, I don't know if anyone told you this, but Chicken Sunday is fake! What a dope.

First place is awarded to the lovely entry below by Mike Kilgroe, entitled "Beef Arson:" 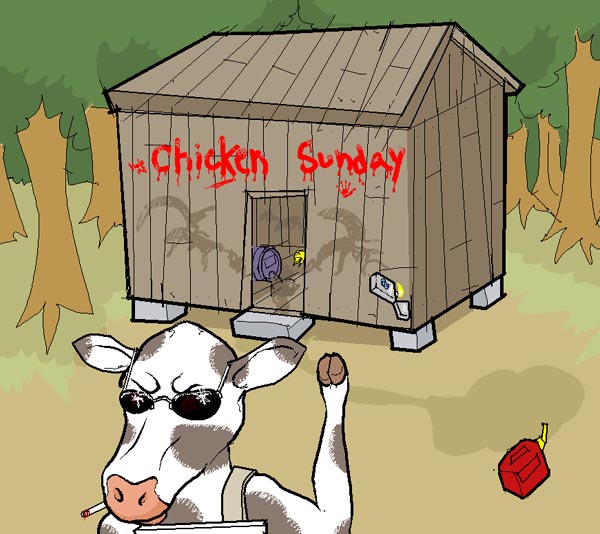 Congrats, Mike, you win a free back rub! But not from me.

Now get the hell out of here.