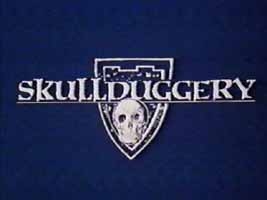 Overview: A medieval curse causes a modern day role-player to kill a bunch of nameless people and also to change costumes every thirty seconds.

The Case For: The movie doesn't attempt to prolong the ending with trivial things like "logic" or "offering any sort of explanation for anything that happens," which shortens the time you have to wait before you can get down to the business of planning your suicide.

The Case Against: Every single scene is more pointless than the last. Also, this movie makes no sense whatsoever. Seriously, what the hell were they thinking? 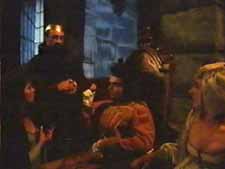 Wow, with the brightness turned way up like this I can almost make out something worth looking at. Almost.

The fun, by which I mean Holocaust-like misery, begins with the title screen and opening credits over a blue background. There may not be much to look at, but if Ota Richter has one guiding philosophy behind his filmmaking, it's "if you can't give them something enjoyable to see, don't give them anything enjoyable to hear, either." A huge chunk of the movie is spent in near-pitch darkness with various irritating sounds in the background. The opening credits, however, have something far worse - the "Skullduggery" theme song. It's like what Mozart would have written if he was an asshole who hated music and people. The song finally comes to an end, proving that we live under the auspices of a benevolent god, and we take a ride through time to Canterbury, England circa 1382 (read: someone's basement with nothing but a few candles for lighting). There, an anachronistically-dressed wizard and his far more anachronistically-dressed assistant go through the sacred ritual of slowly handing things to one another and putting them in a pot. Once the Putting Stuff In Things ceremony is complete, the wizard and assistant offer a prayer to a crappy clown puppet on the wall.

They then move into what is apparently the throne room of the cheapest royalty in the history of Europe and kill a couple of extras for some reason. The wizard offers the king a choice - play a game or die. Remarkably, the king decides to play, so he picks a tarot card from an obviously factory-manufactured deck. He draws the death card. Unfortunately for him, Ota Richter never learned that the death card doesn't actually signify unavoidable death in tarot, so the king is worried. I guess the game is best two out of three, because the assistant then offers the king two apples, one of which is poisoned. The king picks the wrong one and dies before he can even get to the Lightning Round. The wizard takes the king's death as a sign to show off his amazing prowess as run-on sentences. He informs the queen that the king promised him his soul but went back on his word, so now he's putting a curse on the queen's unborn son and his future generations. Judging by her face, since she doesn't get a single line, the queen doesn't give a damn. Neither do I. 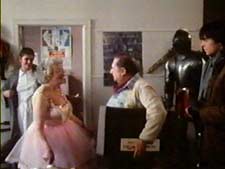 To the sides, Adam and Barbara. In the middle, Fatty McSnackpack and the Denture Gum Fairy.

Like a retard in a snake pit, we awkwardly leap through time and space to "Trottelville, U.S.A. 1982." Maybe there really is a Trottelville somewhere in the United States, but I really hope there isn't. This town is home to nothing but idiots and mutants. In other words, it's a breeding ground for Farkers. Adam (played by Thom Haverstock who looks sort of like Tom Cruise if he was hit by a convoy) is standing outside a hospital. Barbara, a nurse, rushes up to him and complains about the wind, even though we can plainly see that it's not windy. She tells Adam that she saw a scalpel turn into a dagger for an instant, which doesn't strike him as the least bit strange. They make their way to Sluszarczuk's costume shop for a session of fantasy gaming. When they get to the shop, Barbara's father Mr. Sluszarczuk has them help a decrepit old hag of a woman in a ballerina costume pick out a tiara. All the while, the woman insists on talking about her sex life. It is without a doubt the scariest scene in the movie.

Adam and Barbara join Dave, Jake, and the old dungeon master Chuck in the store's basement to start their game. Adam declares that he wants to play a warlock and rolls the dice to determine his stats. He gets a twelve for common sense, and eighteen for stamina, and a seven for charisma, which Barbara says is the highest charisma score she's ever seen. I have to assume that's because every one of the players is utterly repulsive. I admit that taking issue with how they roll their stats makes me a huge nerd, but that just pisses me off. Adam mumbles some magic words and a clown puppet that bears a striking resemblance to the puppet from 1382 falls off the wall.

We see a quick clip of a man in a suit whose face is obscured by smoke putting together a the world's easiest puzzle. The thing has about eight pieces total, and he puts them in one at a time over the course of the film. The puppet and the puzzle both become what one might be inclined to call "motifs" if one were a moron, and "useless wastes of film" if one were actually watching the movie. We return to the game in time to catch some snappy dialogue from Jake. Jake serves absolutely no purpose other than to utter childish jokes about sex, profanity, and poop. Even among a circle of thirty year old gamers Jake is a huge loser. For instance, when Chuck points to something, Jake tells him he should use his middle finger, then laughs like a six year old mental patient. The game breaks up as Mr. Sluszarczuk comes downstairs to ask Adam and Barbara to help out with costumes for the Trottelville Junior College talent show. His vaguely slavic accent is gone in this scene, possibly because of sorcery, possibly because of bad acting. 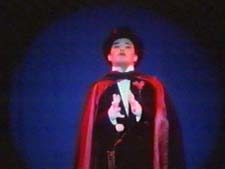 It is impossible not to hate this guy upon sight. Don't even bother trying.

1. Are you at least twenty-eight years of age?

2. Has anyone ever found you physically attractive? Yes or no.

3. If yes, would you be willing to let us beat you until you're hideous?

5. If no, would you be willing to pretend?

7. For males, which of the following best describes you: (A) sexist pervert, (B) flaming gay stereotype, or (C) flaming sexist?

8. For females, which of the following best describes you: (A) ditz, (B) drug addict, or (C) ditzy drug addict?

9. Do you have any discernable talent? Yes or no.

10. If yes, can you refrain from using it at any time during your enrollment at Trottelville Junior College?