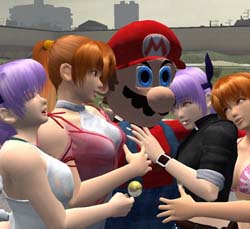 BobServo chillin' at home B)Today marks the publishing of my 50th Something Awful front page article, which is as meaningless of a milestone as my upcoming two-year anniversary with the site. But, on this special day of Thanksgiving (or Me Eatum Big Heap Food Day for our Native American friends), I think it's about time to state what I'm thankful for before this Daily Dirt becomes a maelstrom of self-promotion.

To begin, I'd like to thank Lowtax for having enough faith in me to let me write for his website. I started writing comedy articles because of him, so the courts would probably call it "ironic" if I were to now murder Lowtax out of jealous rage (I won't). Lowtax has created what is possibly the best website on the Internet and gathered an incredible stable of comedy writers, so you should thank Lowtax if you see him in person and then covertly take pictures of his house and post them on the Internet.

I would also like to thank all of the writers on the site, especially the ones who are better than me (you know who you are). You guys don't know how great you are, unless you do. And if you do, maybe it's time to dial back the ego a little there, buddy.

Before I move on, I bet many of you would like to know how I came to write for Something Awful. Well, it's a very interesting story. You see, first I wondered if the site needed any new writers, then I e-mailed Lowtax; the rest is history. I'm sure you'll agree that was quite a yarn. Feel free to share it with friends or loved ones who may be interested in hearing biographies of Internet comedy writers. You'll be glad you did.

Here Are Some Articles!

Picking my favorite five articles that I've written for the site would be very hard. But I went and did it anyway.

Leaked Simpsons Movie Script - I am a terrible, whiny nerd when it comes to The Simpsons, but legend has it that this article was funny! After writing it, I shouldn't have had any reason to complain about The Simpsons again. And I didn't.

A Most Curious Courtship - When you mix Flava Flav and 19th Century prose, you get a heaping helping of hilarity that's way better than your modern, shitty episode of The Simpsons! This article was about 5000 words and I bet no one read it :(

Adventures in Temping Vol. 1 - Temping made me want to kill myself so I wrote a novel about it and Lowtax was nice enough to let me post it on his site.

The Simcity Board of Advisors - Sometimes I use too many words, so this article was an exercise in restraint. A bunch of people digged it, whatever that means.

The Something Awful Book Nook - This is a triumph of writing between me and Maxnmona. I also wanted everyone to know that I read books.

Finally, I'd like to thank all of you readers out there, especially the ones who send praise to my wounded ego; I'm honored to have you as my audience. See you again at article number 100!