Van Damme you aliens to hell!

The Truth Is In Here

Aliens exist. They are real and they walk amongst us as you read this update. They also sit, chew, and mosey amongst us while others decide to saunter, strut, and circumambulate. Oh yes, they love to circumambulate. A popular alien motto is, "circumambulatuation is next to godliness," as well as "no circumambulatuation 'till Brooklyn," and "the roof, the roof, the roof is on fire! We don't need no water, let it circumambulate, yo!" How can I be so sure that extraterrestrials are as real as you, me, or Jeff K.? Simple. I present the following undeniable truth, concrete proof that we're are being visited by creatures from another planet: 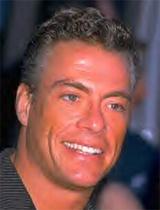 I have had the incredible misfortune of being tricked into watching two Van Damme films within two days. "Impossible!" you are probably thinking. "No man has ever watched two Van Damme films... and lived to tell the tale!" Well I'm living, breathing, and here to tell the tale, so that should be proof enough. The AT&T man installed digital cable here a few days ago, since I had previously been living in Seattle with no television connection for seven months. My parents and friends can't fathom this, often accusing me of being a communist because I never watch television. I eventually became so tremendously un-hip and out-of-the-loop that I was not able to make casual pop culture references in the company of other people. I had to settle for talking about Richard Moll and my outrage upon learning they had canceled "Sledge Hammer." This caused me to break down and pay for digital cable, despite the fact that I don't watch television and everybody who has ever seen digital cable claims it has the picture quality of an Etch-A-Sketch after rotting under the ocean for two years. A few days after installation, I eventually got around to sitting down and turning on the television set. Despite the fact that I get approximately 700 channels, I was awestruck to learn that 699 of these channels consisted of:

Romance movies from the 1970s

Dramas about British people who sit around and don't do anything for 90 minutes, after which point one of them suddenly dies 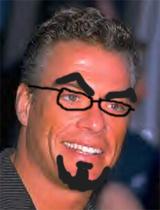 I suddenly realized I was boxed into a corner; there was absolutely crap nothing on television, yet I had to watch something. I got to the wonderful television-watching point where you begin searching for the show that has the lowest volume, hoping that it will put you to sleep and you can dream about something more entertaining, like the dream I had where I was trapped inside my bathroom with one of those laser pointers, only the it wasn't working right so I spent the next three hours trying to figure out why. Before passing out, I managed to hit one of the movie channels, proudly featuring Jean-Claude Van Damme in the film "Double Impact." Keep in mind that I'm using the term "film" in the loosest sense possible, as referring to anything with Van Damme as "a film" is like calling the filthy space under my sink "the most wonderful vacation spot in the history of all mankind." In "Double Impact," Van Damme plays two twin brothers who were separated at birth, vowing revenge on the people who killed their parents. This movie taught me that you can be somebody's twin brother, grow up in a completely different environment and a completely continent on Earth, yet still maintain a psychic link that allows you both to speak with the same terrible accent. Hell, I'm not even sure he has an accent... perhaps he's been kicked in the mouth too many times and his teeth are growing into the back of his throat. Sections of this film were completely incomprehensible, as the native Hong Kong residents had better enunciation than Van Damme. 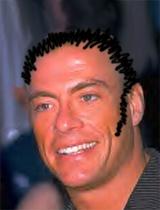 Van Damme teams up with Van Damme so they can overpower the evil non-Van Damme bad guys with the sheer force of embarrassing acting. The movie really begins to heat up when Van Damme has conversations with his twin brother, which are all convincingly portrayed by either shooting the scene with a really dark background (so they can splice the scenes together) or by showing the back of a stand-in double's head. Then they run around for 15 minutes, some people die, they run around for 20 minutes, some more people die, and this repeats until the director runs out of film or realizes his car was double-parked in the White Castle parking lot and they're about to tow it. I forgot how the movie ended, but I'm fairly sure it revolved around something exploding multiple times from different camera angles.

After recuperating the following day, I decided to try again and turn on the television. I scanned through the cooking shows, documentaries about carpenter ants, and "Golden Girls" reruns. The tuner eventually hit the movie channel section and immediately proceeded to beat me in the gut with a pipe wrench. That's right, it began showing Jean-Claude Van Damme in "Replicant." On a scale of 1 to 10, I would rate "Replicant" as shitty. In a clever twist of filmmaking ingenuity, Van Damme plays both himself and... get ready... an evil version of himself! Yes, once more we're treated to two Van Dammes for the price of none! What a bargain! It's like being in a fatal car accident but not having to pay for the gas to get there! Placed in the gritty, bleak, incredibly non-futuristic FUTURE, Van Damme is a serial killer who evades the police because law enforcement agents of THE FUTURE apparently have the intelligence of rubbing alcohol. The FBI or CIA or NAACP or whomever clone the killer so they can use the replicant to hunt down his evil twin. See, in THE FUTURE people would rather spend $15 billion on cloning bad actors instead of the traditional approach of actually trying to find the suspect themselves. Then, if the clone starts killing people, I imagine they would simply clone the clone and have him track them both down. And if the clone's clone decides to go on a murderous rampage, well, I don't know what they would do then. It would probably have something to do with dinosaurs or jets.

So how does Jean-Claude Van Damme prove the existence of alien lifeforms? Simple: watch these movies. Study Van Damme's actions, dialogue, and mannerisms. Take notes on the movie plotlines, carefully noting how one event somehow inexplicably leads to the next. Pay attention to the fact that nothing in the films makes sense, nothing follows any rational train of thought, and nothing even remotely resembles how anything would happen in real life. Then sit back, read your notes, and try to figure out how the hell a human being could come up with such monumentally insipid crap, much less decide that another human being would pay to watch it. It's impossible that any mammal on Earth would think such ludicrous things and somehow be able to glue them all together to create a motion picture. Therefore, by process of insemination, we are led to only one conclusion: aliens from another galaxy are somehow producing films and releasing them to the general public, softening us up for an inevitable invasion. Sure you may be laughing and mocking me right now, but when they start sending the evil Van Damme twin brother clones after you, guess who will be laughing then? Your guess is as good as mine. Probably the aliens.

Fragmaster has taken time out of his busy schedule of staring at the walls to bring us a star-studded review of the Adam Sandler bomb, "Going Overboard." You may not have heard of this supposed "comedy" before. There is a very good reason for that. 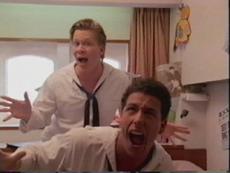 Being somewhat of a Sandler fan, I actually bought this movie thinking well how bad could it be? The box even promises "big laughs on the high seas," "zany cocktail waiter(s)," "stunningly gorgeous beauty queens," and "antics (which) rock the boat in this hilarious sea adventure which contains hysterical comic sketches and sexy fantasy sequences."

I made a terrible mistake.

Gee, a terrible Adam Sandler movie? What are the odds? If you're ready for some world-class hurting, head on over and take a look into the face of terror.