Woman Ain't the Nigger of the World

This weekend Saturday Night Live returned from hiatus and opened with an attack on the mainstream media for shutting out Hillary Clinton and providing Barack Obama with fawning coverage. A fair accusation, to a degree, but the irony of their attack was the debate they chose to use as the setting. The last presidential debate held in Texas was broadcast on CNN. That is the one network that has, if anything, suffered from the opposite bias. They favor Clinton down to the narrative they use to describe the delegate race and the math they use to calculate delegates.

Over the weekend CNN ran a poll on the front page of their website that basically asked "Is Barack Obama patriotic enough to be president?" and recently ran a feature by Jeanne Moos that juxtaposed Obama with a photograph of Osama Bin Laden. Reporters have justifiably pointed out that had Obama lost 11 elections in a row the party and the press would both be howling for him to drop out of race. It was the media, egged on by Clinton's campaign, which propagated the memes that Obama is a plagiarist and Obama is a cult leader.

The grim reality of the Clinton campaign is that they are coasting on fumes towards a delegate brick wall. Without huge wins in Ohio and Texas, some say as much as 25-30 points, she has no mathematical way of overcoming Obama's lead. Clinton seemed conciliatory at the CNN debate last Thursday, almost resigned to her fate, and her scripted final comment was applauded by a teary-eyed press. This weekend she smashed Obama in the face with her olive branch and went into all-out attack mode, suddenly remembering an Obama mailer that has been out for three weeks and becoming incensed at another mailer that quoted the wrong source about how much she loves NAFTA.

The next day she was at it again, portraying Obama sarcastically as a messianic figure capable of parting the clouds and creating a perfect world.

Back to Saturday Night Live, during the Weekend Update portion of the show host and longtime SNL writer Tina Fey had a Howard Beale feminist moment admonishing women for "following Oprah" to Obama and declaring that "bitch is the new black." You can watch the clip below:

Fey's howling support for Clinton dovetails nicely with the views of many old-guard feminists, including Gloria Steinem, that white women like Clinton are subjected to more institutional unfairness than black men like Barack Obama. On its surface, the claim is supported by history. Black men had the right to vote, at least in theory, long before white women.

The Clinton campaign has naturally sunk its talons into Tina Fey's comments and Clinton herself has been touting them on the stump in Rhode Island. Fey's argument, echoing Steinem, is an unfortunate case to make for the former First Lady with every possible advantage going into this race. It suggests this has come down to a pissing contest between female and black minority groups over who is more oppressed and therefore deserving of the nomination. Not exactly empowering, even if true, but coming from Fey it's frankly pretty fucking insulting.

That very night on Saturday Night Live the suspense was ended and America learned who would be playing Barack Obama. Was it the only black man on the cast? Nope, Kenan Thompson is too fat to play the lanky Obama. 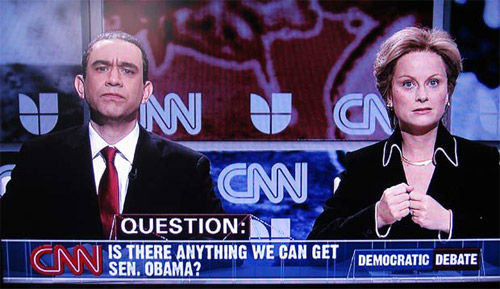 Instead it was Fred Armisen, who I believe is some sort of Jewish Mexican. Why bother hiring another black comedian when you're only going to use him for a few sketches? How oppressed must the women of SNL feel to outnumber black men five-to-one?

It would be unfair for me to consider the cast of Saturday Night Live as a microcosm for the racial and gender divide, after all there have been as many as two black men in the cast at the same time. Fair enough, so let's use a more germane example. Let's talk about the United States Senate.

I have a couple of handy charts detailing the female and black senators since 1920, when women received the right to vote.

First, let's look at the women. As you can see from the chart there are currently 16 women sitting in the US Senate. My high level math skills allow me to calculate that 16% of the Senate is women. Certainly women are under-represented, but now let's take a look at the other side of the coin.

There have been a total of three black Senators since 1920. There is currently one sitting black Senator, Barack Obama, who happens to be running for president.

I do not mean to diminish the struggle of women for equality across the United States. Things still are not equal for women, but I did not start this pissing contest and neither did Barack Obama. He has struggled to keep racial issues at arm's length and has never fallen back on his race as a reason for being behind in the polls. Black men, and by extension especially black women, have suffered far longer and far greater inequality, and continue to suffer far greater inequality, than white women.

When Saturday Night Live hires five black featured players I might be willing to change my mind.

Until then, I'll be contributing my time, money, and voice to the one candidate left who was against the Iraq War from the start and refuses to take money from PACs and lobbyists. He also happens to be black.