Don't Fake the Funk on a Nasty Dunk

Thursday, May 05, 2005 by Reid "Frolixo" Paskiewicz
Welcome to this to optional, freeflowing, train-of-thought pseudo-Livejournal full of half-assed ideas, inspiration, and anything else we feel like writing about but know isn't entertaining enough to warrant a full article or front page feature.
I'm Ghost Dad 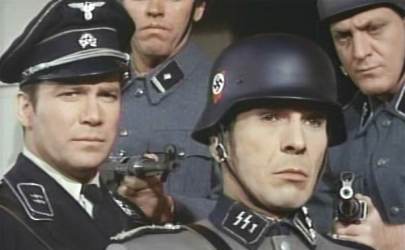 This was how Mr. Sulu got fired.

If I was born 100 years ago I would’ve been thrown into a well at birth or used as cannon fodder in one of those big wars they were so fond of back then. I called into work today because I woke up feeling like a retarded turtle. Then I tried calling into the Something Awful headquarters to tell Lowtax that I was too sick to write, but he wouldn’t let me have a day off. He was like, “You asshole!”, then docked my pay and penned me in for a double shift on Christmas. I think it’s time to try to start another writer’s union. The last attempt ended badly when there was a snitch in our ranks and Lowtax sent some thugs to break Zack Parsons' legs. This time it will be different. We will catch him by complete surprise and then have a strike and beat up the scabs (Fragmaster). Oh crap, I hope he doesn’t read this.

The Dangers of Being an Internet Writer

Today I went to one of the Detroit Metropark to take pictures of the gnome for the update, and I was attacked by a cantankerous goose. I had to flee for my life and leave my gnome behind. I'll probably go again tomorrow with a loaded .38 revolver to retrieve it. If I don't come back, I leave everything to the Kingdom of Greenland and Bruce Springsteen.

Unsolved Mysteries Update: The Case of the Banana Cream Pie

I've always been a big fan of Fragmaster and his Fireman comics was the first thing I started reading on this site. When I attended Gooncon2K5, he was the first person I saw there. I randomly spotted him in the crowded Vegas streets and involuntarily shouted "Fragmaster!". I couldn't believe he was a real person since he was such a caricature in my mind. Immediately a look of panic crossed his face and I could tell he was thinking about fleeing. Thankfully Livestock was close behind and reassured the frightened Frags that I meant no harm. Later on when he asked who I was I told him that I was Greasnin, so I think he still has us confused.

I am dedicating this update to the good people of GBS in the Something Awful forums. May the power of the manbabies be with you good sirs, and may the spirit of Bigpeeler be in your heart always.

A special thanks to Johnny "Doc Evil" Titanium for this Star Trek image.