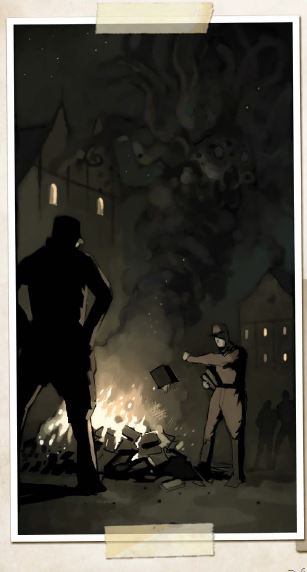 Steve: Okay, so me, Betty, from the future or the past or whatever, told me to find Hans Gruber from Die Hard and said he was in the barracks.

Zack: There is another building that apparently housed the garrison.

Steve: Yeah, that sounds like a good idea. Walt has his rifle, right?

Zack: Actually there are all sorts of weapons available left behind by the Americans.

Steve: Both of them are grabbing Tommy guns and hand grenades and spare ammunition.

Zack: Those are going to lay waste to flashing colors.

Steve: Better to fight a flashing color monster with too many bullets rather than not enough.

Zack: Too many bullets would be one bullet.

Steve: Let's just find this Gruber character and let me be the judge of how many bullets to shoot at shapeless energy entities.

Zack: You head outside, into the biting cold. You notice a red light winking atop the radio tower that you did not notice before.

Steve: I think we might have tripped the burglar alarm at some point.

Zack: The moon is bright and the mountain night is clear, making it easy to find your way to the barracks. There is some damage to this building as if there was a short gun battle. Just inside, you find a few bodies covered with bed sheets.

Steve: Walt will check them out.