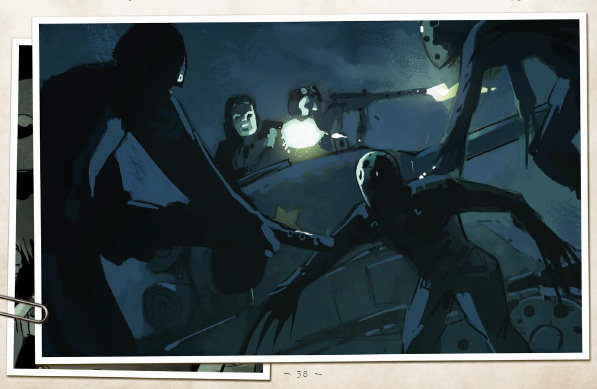 Zack: He lifts the sheets and finds four dead German soldiers. These men must have been the force left behind to destroy documents and the like, caught before they could finish the job.

Steve: What do you mean 'look like' normal guys?

Zack: I mean that based on all evidence you have before you, they are normal human beings.

Steve: I don't like the way you're saying that. Why did you bring up that they look normal?

Steve: I'd better take a closer look at these guys. See if there are weird surgery scars or runes or something on them.

Zack: Steve...alright...you are in the process of undressing dead German soldiers when a man tries to run past you and out of the barracks. Betty doesn't notice because she doesn't hear anything, but Walt hears this guy yelling "AAAAAAAA!" as he runs past.

Steve: Walt is going to tackle him if he can.

Zack: The guy runs out into the windy night. He sees the red light flashing and stops, giving Walt a chance to easily tackle him. The guy is a scruffy soldier in a gray uniform with the now-familiar wolf's paw/eye/buzz saw symbol on a patch on his arm. He has his hands tied behind his back and he looks like he has been clocked a couple times.

Steve: "And you can shut yours, kraut! Hatch, that is. Shut your hatch mouth."