The Ridiculous Artwork of the Street Fighter: Player's Guide 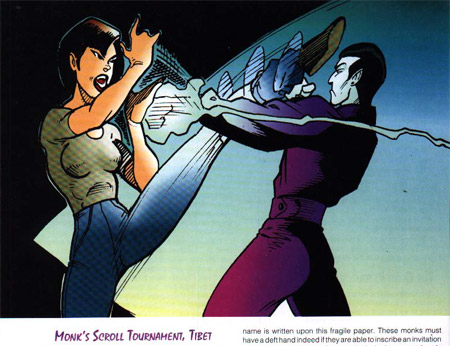 Zack: "Come on down to Monk's Scroll Tournament, Tibet. We're the seat of Wizard's Cape County."

Steve: Her torso is a worried frog.

Zack: I'd be worried too if vampire Spock was coming at me with smoke fist.

Steve: They're both sort of oddly dressed for a fighting tournament. Like she is dressed like a mom from 1980 and he's dressed like, I don't know.

Steve: Man Tibet is not at all like Vertical Limit told me it would be.

Zack: You just ain't been to Druid's Holler or Barbariantown.

Steve: Dude trust me I have been to Barbariantown lots of times.