Entertainment Industry, Take Me Away!

Hollywood has a real problem with creativity right now. It seems like we're getting a new old thing every week. If it's not a movie like King Kong, it's a new Dragnet or Kojak, and most of it's pretty bad. They might be getting close to the bottom of the barrel now though, because according to the IMDB, a whole new Police Academy movie is in the works. The cinematic megafranchise that introduced us to Bobcat Goldthwait and that sound effects guy is being as enthusiastically dredged up as a homeless guy's body from a vat of rotting milk. All the time the list of things to remake is getting smaller, so reason would assume that any season now will bring an idea that's been on the tip of everyone's brain-tongue since Xena became popular. I'm talking about American Gladiators. 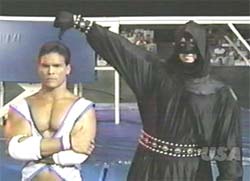 Out with the old!

It can't just be a straight-up, plain remake, it needs something new. New events, a darker arena, and no more of that weight room interview bullshit before commercial breaks. There's no way they were really working out in there during filming. Thunder wasn't stupid. He had to know those fast emergency reps weren't going to do anything for him on "The Wall" five minutes from then. If anything they'd probably hurt him because his arms would get all tired. In fact, someone should make a graph of how well the gladiators performed in events just after working out compared to rested gladiators. I'm sure it would be very Thunder-enlightening.

But for it to be really successful with today's audience, the new series needs a long, self-referential story with a sci-fi twist. The kind of story that's so long and convoluted that you can't help but watch every week and then feel like a jerk when it's over because they just led you around for an hour while showing you 6 slightly different commercials of that same guy talking into the toy microphone about Domino's Pizza. The kind of story where if you miss a few episodes you'll be completely, for lack of a better word, lost. I've had some very preliminary ideas for something like this since 2000 or so, when I first realized Gladiators had gone off the air. I figure now would be as good a time as any to write some of them down and maybe get some TV guys to read it in the process. 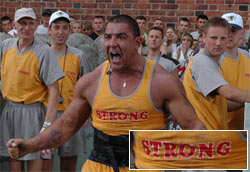 This is Maximus. Word on the shirt is he's quite strong.

It was the year 2080 in a gritty, futuristic world. The Seventh World War had just taken place, leaving Gladiator Arena in ruins and all but one of the gladiators dead. The strongest gladiator, Maximus, fought off enemy invaders by converting his Bowflex into a rudimentary ballista, wiping out whole battalions and turning the tide of the battle. Now a national hero and champion of good sportsmanship and teamwork around the globe, Maximus gives up his luxurious life to do what must be done: Rebuild Gladiator Arena and train a new generation of gladiators, no matter the cost!

Each week, four contestants will battle each other in games of strength and agility for the right to take their place alongside Maximus as a gladiator. The winner will be injected with a concoction officially known as the Secret Training Enhancement Recipe prOviding Increased Development of Strength (called "Gladiator DNA" for short) and subjected to the largest amount of physical activity since Aeon Flux came out and millions of people ran into the woods to get as far away from movie theaters as possible. He or she will then don the glittery red, white and blue spandex outfit they crafted during the final stage of their training, and take a radical name chosen for them by Maximus. It is then a new gladiator will be born.

That's just the working title, it would probably be called "A Very Brady- Holy Shit I Can't Believe They're Making Another Damn Brady Bunch Show" by most people. When we last saw the Brady family in 1990's "The Bradys," they were fucked up, simply put. Marcia was an alcoholic, Jan's uterus was an inanimate object, and Bobby was crippled in a racecar accident. I don't remember what was going on with the other family members, but if I had to wager a guess I'd say Cindy was a stripper, Peter was a deadbeat dad, and Greg had a problem with murdering people. The night after I caught that show for the first time I had a little trouble sleeping. It felt like meeting an old friend you haven't seen in years who's now a scraggly-bearded chain smoker wearing a shirt with more stain coverage than clean areas. Even if it's just a 30-second spot with Carol Brady saying something like, "Boy, I'm glad all that bad stuff happened in an alternate universe and not to us! Come on Bobby, let's go for a jog!" I'd be happy.

Star Trek: Just a Bunch of Ship Battles and Tits 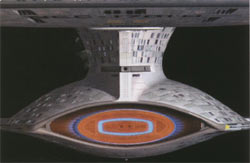 Find me one person, just one, who's watched Star Trek in the last 18 years for anything other than neato spaceship fights and skintight clothing. I doubt you can, because mental facilities like that are off limits to strangers. Why do you think The Next Generation is on Spike, the so-called "first network for men", for 3 hours every weekday? It's not for the mind-expanding voyages into the unknown, it's for the lady lumps nearly bursting out of Counselor Troi's uniform. Sex is all over the place in Star Trek, just go back and have a look at the ship itself. The top part is a big round thing with a nipple in the middle, and under that there's an enormous sideways representation of female genitalia. I don't know about you but if I caught my kid watching that show I'd cover their eyes. Not so much because of the raunchy-looking ship, but because it could be one of those episodes where Data malfunctions and Brent Spiner has to try to act out an emotion.

ST:JABOSBAT would cut the preachy pacifist fluff out of the picture and replace it with more episodes where things need to be blown up. I'm talking an all-female crew, and here everyone gets a unique jumpsuit. You see, before only the biggest tittied cast member got the unique jumpsuit, but like Internet nerds are saying, Star Trek's gonna have to change if people are going to watch it again. Just imagine, 60 minutes of stuff exploding, the ship shaking around, boobs jiggling, and everyone's working on their little touchscreens. Hey, maybe someone's arms got messed up and she needs to press her touchscreen WITH HER BOOBS! Hell, I think we just wrote most of the season 1 finale right there.

The nerdly adventure doesn't stop quite yet. (Now with art!)