It took six years for Gary Gygax to compile a second official Monster Manual, but only six days for Steve and Zack to delve into the second installment of their dissection of Monster Manual II. Like divine creators, on the seventh day they rested. And then they had piss pants nightmares about trying to kill the Tarrasque. 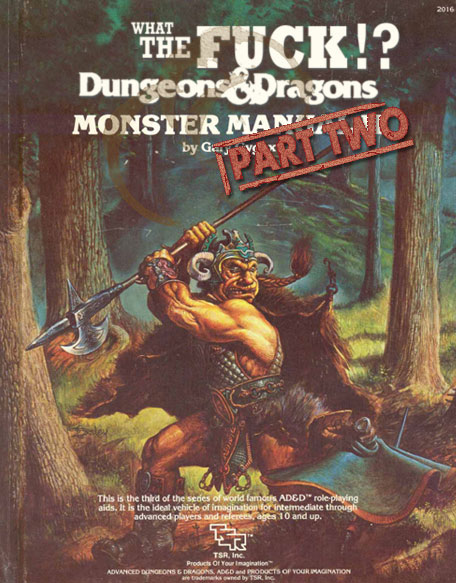 Steve: Seeing the cover again reminds me of last weekend when I went to my uncle Ted's softball game and ate too many hamburgers or bad hamburgers.

Zack: You're not sure which one?

Steve: I ate too many hamburgers for sure, but they also might have been bad hamburgers.

Zack: It's easy to eat too many hamburgers. You might eat just one and then still feel like maybe you could put away another, but it's a hamburger trick. A few bites in you realize you can't, but you feel committed to that hamburger and it ruins your hamburger picnic.

Steve: Hamburgers aren't some 99 cent hot dogs. You don't want the rest of one of those you can just throw it away. You don't leave a burger halfway finished. It's like that George Washington portrait with the bottom part unfinished. They just put that in text books forever because some dude got lazy. Couldn't hack it.

Zack: I understand your motivation, a half-eaten burger will haunt you forever, but why do you think they were bad hamburgers?

Steve: What bathroom number is it when you barf?

Steve: Okay after the softball game I did a number five.

Zack: I'm guessing that wasn't a three and two ones.

Steve: I looked like someone stepped on a packet of barbecue sauce and both ends busted.

Steve: No I was saying that giant man looks like he's swinging a softball bat.

Zack: God damn it, Steve! We're going to get emails!