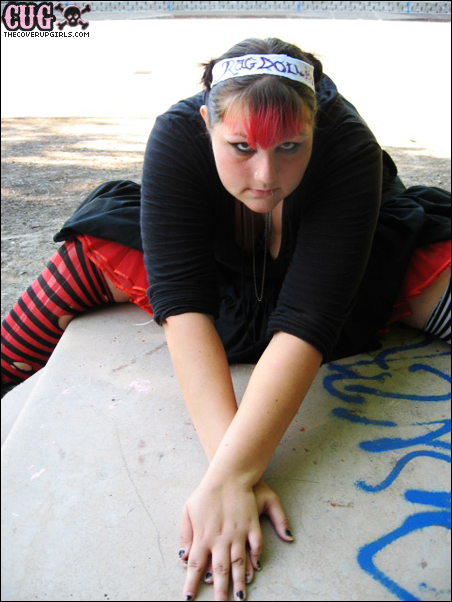 Dr. Thorpe: "Oh, don't mind me, I've been hired by the city to etch out graffiti with my caustic vagina."

Dr. Thorpe: "Oh, don't mind me, sometimes when my worms get really bad I just have to scoot along the driveway like this."

Zack: I get the feeling that about two seconds before this picture was taken there were klaxons sounding and an automated voice warned, "structural integrity failing." Then the world discovered that it was possible to bruise cement.

Dr. Thorpe: I wonder if scientists came to photograph the giant wet print. "Our findings suggest that this area has been licked by a wooly mammoth."

Zack: "It's either that or someone has dropped a cupcake the size of a VW Bug icing-side down."

Zack: By the way, that is the most ominous cleavage I have ever seen.

Dr. Thorpe: Dozens of foolhardy spelunkers have been lost within Clammy Gorge.

Zack: You could probably shake a couple Tie Fighters if you have the skill to fly down her shirt. I can just imagine the modulated scream and burst of fire as one slams into an areola the size of an asteroid.

Dr. Thorpe: You'd better get out quickly, or a giant carnivorous worm will shoot out of her vagina to devour your tiny craft.

Zack: Yeah, don't park it in there or you'll have to go outside with the flamethrower and burn the boob lampreys off the hull.