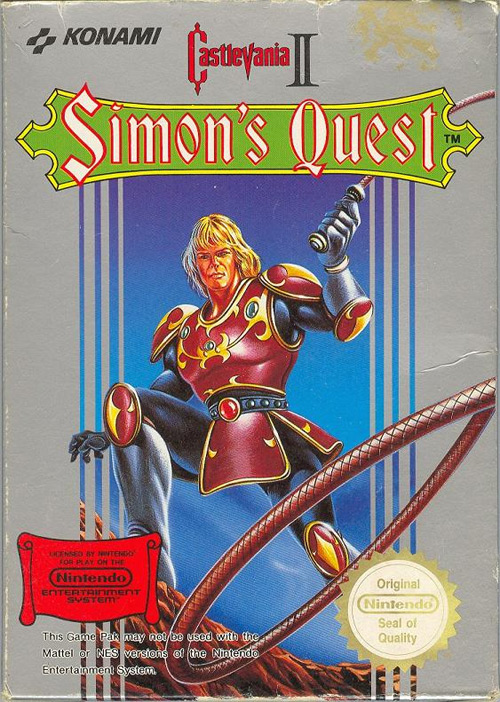 Dr. Thorpe:Charles Bronson as He Man.

Zack:Simon Belmont is the most horribly unprepared vampire hunter in the history of vampire hunting. Stakes? Garlic? Swords? UV flashlights? Bullets with exploding silver nitrate tips? No, he's got a whip.

Dr. Thorpe:What's he going to do, whip their teeth out? Maybe once you're a vampire hunter for long enough it just gets way too easy and you have to challenge yourself. Next time he goes out he's going to have a sharpened carrot.

Zack:The time after that he's going to chum himself up with human blood and break their necks with his bare hands when they get too close. I guess that probably makes him the most bad ass vampire hunter.

Dr. Thorpe:Well, he's not totally foolhardy and cocksure. He keeps those elbows protected. You're not going to get very far killing vampires without some good elbow armor. The neck? Leave it open, they're not going to go for it, they know you're expecting it. It's the elbows they go for.

Zack:Wasn't Simon's Quest the Castlevania game that had a ridiculous part where you had to kneel by the edge of some deadly water for like a minute or more to get a boatman to bring you across? I vaguely remember hearing about how to get past that part from a friend and just being outraged, even at a young age, that the designers had included such a random impediment to advancing the story. It's like trying to solve a crossword puzzle when the clue is just a single letter.

Dr. Thorpe:I never played it, so I don't know. What I do know is that most Nintendo games were utterly terrible, no matter how much nerds want to romanticize them today. People complain about the plots in games today, but back then it was all "LOOK A SWORD" and "YOU WIN GAME!!!" And people look back and say "ah, 'the princess is in another castle,' what simple elegance," but fuck that. They didn't even bother back then.

Zack:They also always talk about how modern games are so dumbed down and easy. The old games were hard because they just threw ridiculous numbers of assailants at you. Every time you walked down a street or through a castle it was like the school day just ended at skeletal warrior and evil wizard junior high school. I remember dozens of games where the number of enemies on the screen would actually glitch out the NES hardware. The designers couldn't conceive another way to make the game a challenge.

Dr. Thorpe:It's a tough point in your life when you realize that all the games you played really were as stupid and worthless as your parents said they were.

Zack:Yeah, and it's even more pathetic when you can recognize that, but you're still salivating over the release of the next expansion pack for Murder Boat 3D.

Dr. Thorpe:Somehow when I was a kid, it never even occurred to me that the game might just be shitty. I thought I was just bad at games when I couldn't get past level two of Bayou Billy. But it turns out it was just crap.

Zack:I don't think anyone got past the second level of Bayou Billy. I'm pretty sure if you download the ROM now using save states to get to level three you'll find out that it's just a huge mass of alligators and yokels with shotguns.

Dr. Thorpe:But now people who were raised on nothing but Nintendo think the Final Fantasy games had objectively great plots and great music because they're never actually read a book or bought a record.

Zack:If someone tells me how moving the opera music was in Final Fantasy VI then I pretty much instantly discount their opinion on everything. It's like finding out a guy secretly believes the holocaust was a lie. Their horrible judgment in one area taints everything else they say and do.

Dr. Thorpe:Yeah, and the people who cry when Final Fantasy characters die? Imagine sitting them down in front of a Keats poem or something, it would probably kill them.

Zack:Only if it was being read by a girl with giant hair and they had to push the X button at the end of each stanza.

Dr. Thorpe:They'd have to make an Xbox360 version of Ode to a Nightingale with rad graphics. That might be pretty cool, except that the minds of gamers are so tender and hypersensitive from dealing only with complete dreck that actual art might give them a stroke or something.

Zack:When something is actually objectively good, like say the stylized opening of Fallout 1 or 2, it is heralded as the greatest thing ever created when in reality it's roughly on the same level as say a Rolling Stones B-side. No, that's just mean spirited. They had a Louis Armstrong song in the intro to the second Fallout. That rates as at least equal to one of the singles from Voodoo Lounge.

Dr. Thorpe:Yeah, or maybe a Mick Jagger solo track from the 80s.