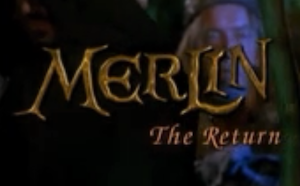 Overview: The name's Merlin. John Merlin. I'm returning. This is my movie, about my returning. You got a problem with that? Take it up with HR. Oh wait, you can't, because my invincible time-travelling knight retinue just chopped off their fucking heads and then some skeletons dragged them to super hell, probably to fuck them for a million aeons for being a bunch of little procedure pussies with no formal training in cavalry or heavy weapons tactics.

The Case For: The scene where King Arthur and his merry band try to pillage the countryside by stabbing an oil truck to death is pretty funny. Too bad the rest of the movie is as dead as a Lent sermon.

The Case Against: "I'm going to kill you...piece by piece." - actual quote from this movie 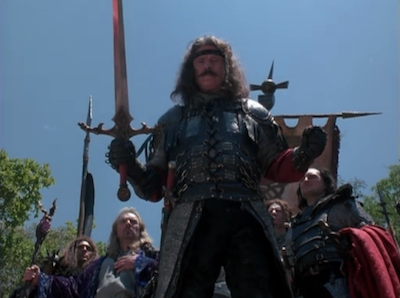 Of all the terrible and monstrously ill-conceived Merlin-themed filmic whimsycoasters out there, this is (hopefully) (one of) the worst, but officially it's hard to tell because there's just so goddamn many of them. This particular stroll down the long, salty pier of Arthurian legend distinguishes itself by having one Rik Mayall (a.k.a. "Drop Dead Fred") in the title role, and we'll be honest, he makes for a pretty decent Merlin, at least compared to some of the other examples we've seen (we're glaring at you, James Callis). Plus you know a guy's got balls when he lets IMDB make this his main profile photo. Shine on, you crazy Rik Mayall.

Director Paul Matthews, on the other hand, is definitely on our shit-list, if not for this then preemptively for the grabbag of cinematic horrors he littered all over the late '90s/early 2000s like Soviet cluster mines. This kids' movie was probably a bit of a stretch for Paul, whose directorial resume mostly consists of Z-grade monster movies, and it shows. IMDB houses one and only one quaint little nugget of trivia on this Matthews-edition Merlin: "This is one of the few live action productions based on Arthurian legend in which the actor playing Merlin is younger than the actor playing King Arthur." We're just so grateful that the usual phrases like "battle thong," "laser titty witch" "nerf guns," "baboon rape army," and "Nazi chariot cyborgs" aren't in there that we're not even going to make a stupid joke about that. What we will make stupid jokes about is this:

Actually, that was pretty awesome. We have absolutely nothing to say about that. Well shit, we're already out of material. See you next week folks!

Okay, fine, we can't actually stop the review there or they wouldn't pay us/feed us/pay us our feed because you just watched the only mildly amusing scene in the entire movie: King Arthur and his jocular band of anachronisms trying to slay an oil tanker. Of course, you also watched the other "comic relief" scene which isn't funny at all, namely Auntie Bewilderina/Barry Boppins almost committing thirty counts of vehicular homicide--not to mention at least one near-regicide--every quarter mile or so. Maybe in the director's cut she runs over Sir Galahad (the Right of Way) and that's why Arthur is obsessed with killing every motor vehicle he sees. Or maybe they sit down and have a roundtable chat with Charlie Rose about their courtly grievances RE: our usage of industrial petrochemicals.

Still, 50% laughs is a better track record than most things on our list, maybe if they had played this for laughs we wouldn't be here reviewing it. Instead, all attempts at humor stop about 10 minutes in, and instead we get lots of faux science equipment, stupid fake lightning fights, and a madman sucking people's skeletons out and sending them to commit murders for him. On the plus side, Mordred (who else) has a penchant for ham-tacular dialogue and captivating facial tics: