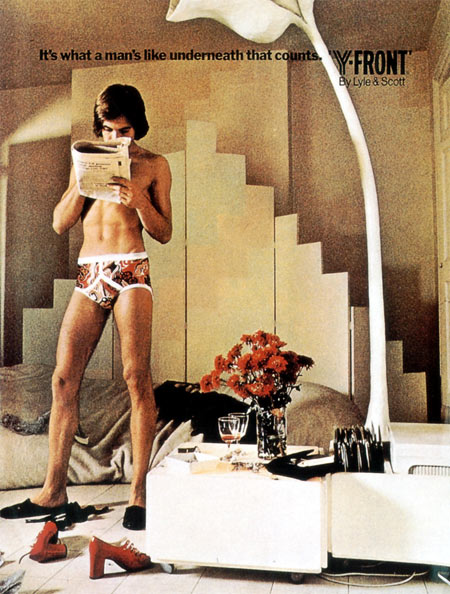 Zack:At least this guy can open some wine. Or he has the robot to do it.

Dr. Thorpe:Yeah, the real Gatsby would never let the hinges on his fucking... staircase thing show.

Zack:I think that's a changing screen. You go behind it and turn into an absolute cunt. Sort of like Kafka's Metamorphosis only you come out and do crossword puzzles in your tighty blighties half-sloshed on robot wine.

Dr. Thorpe:It's not this guy's fault he looks like such a tit. He dresses that way to please his sixty-year-old girlfriend, who dresses in giant black feather boas and has hair like Olive Oyl.

Zack:I don't imagine that this ad inspired many people to go into department stores and ask "where are the Y-fronts by Lyle and Scott?"

Dr. Thorpe:Second Popeye reference of the night, let's see if we can push our luck with these. Jeez, this guy's gayer than POPEYE.

Zack:I think that "guy" is actually a woman. Notice the strategic placement of the newspaper. Notice the slim waist and hips. Notice the complete lack of a bulge.

Dr. Thorpe:Yikes, I'm having flashbacks to the terrifying gender ambiguity of those Japanese goths we reviewed months ago.

Zack:It's like one of those episodes of Maury where they have a fashion show and you have to guess which women are transsexuals and they always load it full of ugly women so that the pre-ops look hot by comparison.

Dr. Thorpe:This person does have a haircut sort of like Dorothy Hamill. Or Mark Hamill. Or Prince Valiant. Yeah, we're never gonna figure out the sex here, the seventies were the great equalizer. Everyone dressed like a bad dream.

Zack:People had sex like crazy and they didn't even know who or what they were having sex with.

Dr. Thorpe:Man or woman, you were nothing but a spectacle of horror topped with a bulbous hair helmet.

Zack:I think back in the seventies the only secondary sexual organs - maybe the only sexual organs period - were the huge patches of chest and stomach hair most men seemed to cultivate. Maybe back then sex was more akin to pollination.

Zack:Oh man, don't even suggest that. It would be like reviewing your own heart surgery while it's happening.