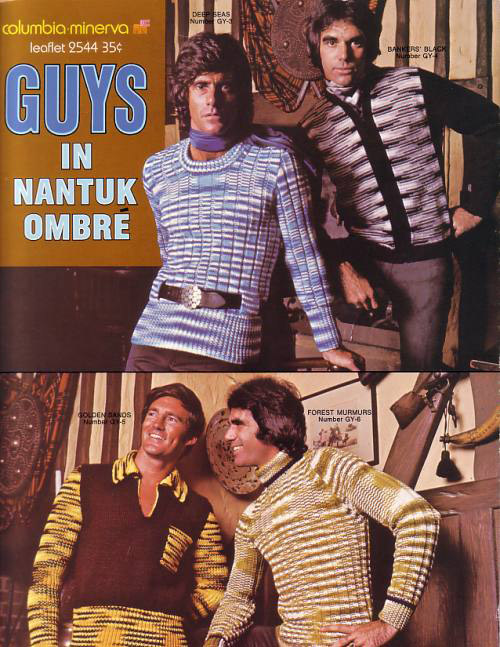 Zack:The sheer madness of that is staggering. Maybe it's full of iron pellets and keeps his sweater from floating away on a rainbow colored zephyr that breezes through the hallucinations these designers were having.

Dr. Thorpe:Plus he's got that thing on his neck. He spent all his money on a big sweaterbelt and couldn't afford to upgrade to the turtleneck model.

Zack:It's the mod male version of Isidore Duncan. It will be a tragedy on the highway with Zipper Joe over there.

Dr. Thorpe:If these four guys had a band, it would be the worst band you've ever heard. The top two are the singer and guitarist, the bottom two are the rhythm section.

Zack:What's with the guys in the banana sweaters in the hunting lodge? I think they're laughing because someone in khakis just shouted "whoa, come mister tally man guys, what the hell?"

Dr. Thorpe:There's a banana on the wall behind them, too. Weird.

Zack:In case you were wondering, here was my inspiration for these beautiful outfits: the majesty of the banana.

Dr. Thorpe:Combined with the modern flair of a malfunctioning television and the scientifical fascination of eye-melting moiré patterns.

Dr. Thorpe:They should knit a girlfriend onto one side of it too, because this photo is a little too pathetic.

Zack:I'm pretty sure the guy with the sweater belt is the girlfriend. Did I say sweater belt? I meant "Deep Seas."

Zack:I think "In Nantuk Ombre" is Spanish for "The Sweater's Blood."