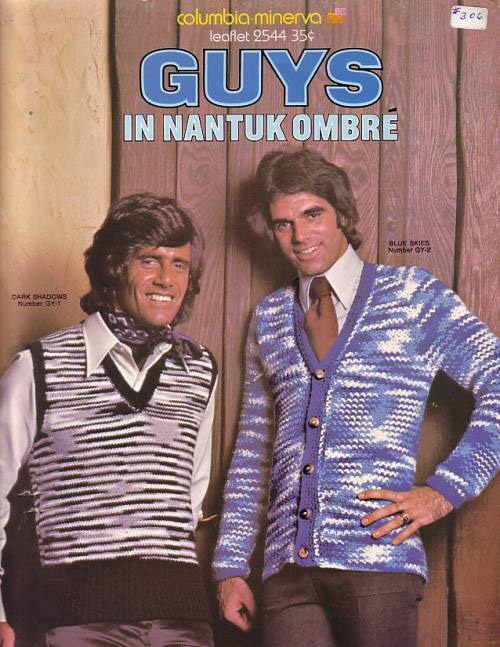 Zack:"Hey Chet, looking greasy today." "Thanks Marc, hey want to go hang out in a log cabin? Sure!"

Dr. Thorpe:The most disturbing thing is that the guy on the right is wearing slacks and a tie under that thing. Even back in the seventies, can you imagine showing up at the office with a silly crocheted cardigan? Your boss would just give you that "get out" look.

Zack:It's like Mr. Roger's sweater has been tye-died by a cold and uncaring hippie computer.

Dr. Thorpe:The man on the left is really frightening. He looks like he lost his face in an accident and they created a new one with leather and silly putty and then put some huge hair over it to cover the seams.

Zack:I think that he's just wearing the William Shatner mask from Halloween that has been covered with bronzer to make it seem lifelike. Obviously a failed attempt. There's something childishly mischievous about these two guys though. Their grins, their poses, their garish sweaters; whatever it is they seem like they're about to trick someone into whitewashing that fence behind them so that they can go skip stones.

Dr. Thorpe:If you look really closely you can see that the sweater-vest is called "Dark Shadows." I think that instead of skipping stones they're going to go try out for bit parts on ultra-low-budget vampire soap operas.

Zack:That makes sense. That guy on the left looks like he was made for that creepy poorly-lit video they used back then.

Dr. Thorpe:It's easy to imagine the sickening slurp when he pops that face off and puts it on his nightstand at the end of the day.

Zack:That #206 sticker up in the corner is making me suspect that this might have been entered into evidence somewhere.

Zack:That follows with the evidence sticker. This might be the very photo that got these two convicted.

Dr. Thorpe:We've looked through a magic portal to the other side of the creepy Calvin Klein ads. I feel like I've just had a sickening epiphany.

Zack:It's like walking in on your parents having sex or realizing that red food coloring is made from beetle wings.

Dr. Thorpe:Or maybe that feeling is just me getting dizzy from looking at the "Blue Skies" cardigan.

Zack:Warning: sweater may cause vertigo.

Dr. Thorpe:They both look like the sort of manly baritone pop singers that were popular back then. They were masculine but a little bit effete, and they sang songs about tiny bubbles in their wine and had names like Englebert Humperdinck.