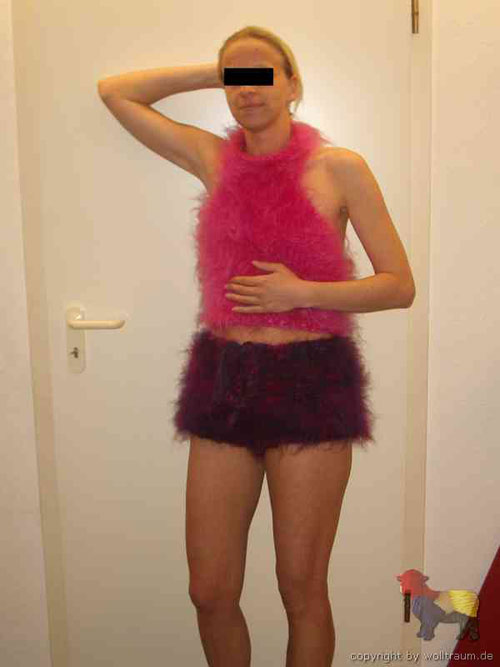 Dr. Thorpe: Lady (or dude or whatever), your eyes aren't the part we're worried about.

Zack: Maybe they just got really creative with the rest of the censor bars.

Dr. Thorpe: I think the police put that on there to protect the privacy of the victim. Have you ever seen a photo that looked more like someone being forced into a "sexy pose" at gunpoint?

Zack: Well, there was that Lohan spread in New York magazine, but I don't think Ketamine counts as a gun.

Dr. Thorpe: I can't tell if she's posing or if she's in some kind of yogic suicide stance and she's about to exert pressure from both hands and snap her torso in half like a pencil.

Zack: There's something really disturbing about the door. Like this picture was taken in an office instead of an apartment. I can only imagine what sort of crazy German office isn't thrown into tumult by the emaciated man-girl wearing a pink wool tabard.

Zack: Not to mention what appears to be a giant year-old used tampon serving as a miniskirt.

Dr. Thorpe: If you leave 'em in long enough, they swell up and grow around you.

Zack: Only if you have whatever orifice belongs to the third gender that exists only in Germany.

Dr. Thorpe: And yet, even if that were true, it's still not as gross as her top.