I'm going back to school. 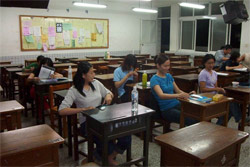 Ling Nguyen works on her green desk sit routine.There are always fans eager to tell me that I "single-handedly killed comedy" I was being so funny or that I make this comedy stuff "look impossible." I appreciate the compliments, but even experts have room to improve. Every comedian knows the best way to hone the comedy craft is in front of a live audience.

I've been taking night classes at my local community college. The Fundamentals of Comedy. The teacher insists we call him "coach" so I technically have a comedy coach. He looks like John Waters with a beard. Every time I call him coach I try to sound serious so he doesn't think I am making fun of him.

He gets a lot of phone calls from someone named Audrey or Aubrey and he turns his back to the class and whisper-yells about furniture and "the cats."

Our first exercise for the class was to come up with a distinct comedy character. I decided to be the guy who gets really red-faced and sweaty and stares intensely at the audience. I didn't have to do any planning, the character came naturally to me after my hyper-kinetic cocksman braggart character fell through. 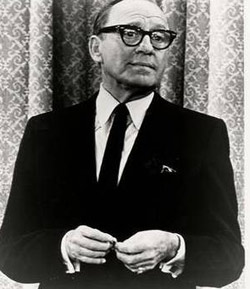 Pioneer of the cheapskate.By day our classroom is a biology classroom and it smells like pickled pig fetuses. During our practice runs I tried to incorporate that into my act by dry heaving throughout my routine. Everyone thought I was really going to throw up and they brought me a waste basket and a janitor's bucket. At that point I felt like I had to deliver for the sake of completion.

One of my favorite comedy characters is the cheapskate. Jack Benny was the most famous cheapskate. I've been considering the cheapskate for myself, but I'm concerned about the price of the rimshot.

My coach said the two lowest forms of comedy are swearing and hyperbole. I agree with him, but still plan to spend every second of my weekend murder-fucking 4,000 women into ass hell until they're so raw and prolapsed they look like they are shitting out bloody elephant trunks.

Some comedians like to tell jokes about politics. I would rather allow my views to remain a mystery; at least until my closing minute-long rant about sending all Mexicans back to Mexico. Why do they come here if they won't learn English? It's not a joke, I'm honestly asking the question. I never joke about the invading armies of illegals on our border.

I don't actually tell any jokes. Or do stand-up. My act is a precise five minutes of shifting uncomfortably, mopping sweat from my head, and clearing my throat. I'm billing myself as the world's first joke-free comic. I don't want to put too much pressure on the audience.

Next week we are going to practice how to deal with hecklers. I get nervous in front of the class, so I don't know how well I'll handle the heckler. Coach said we should try to develop our own strategy and good comebacks. I am going to bring in a boom box and if someone starts heckling me I'll play my rap tapes to drown them out. This is also what I do if they don't heckle, but I can turn the volume up if anyone causes trouble during the rap tape portion of my act. 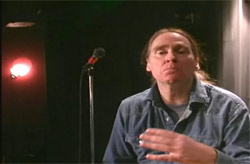 Those who can't, teach. Those who can't teach, coach.There's a handicapped girl in a wheelchair in my class. Everyone hates her for having such an unfair advantage. Yeah, sure, go ahead and roll into this comedy classroom like you own the place just because your uncle is Steve Martin.

I've only been to three classes and already I feel like I'm showing signs of improvement. I've stopped biting the other students and I'm allowed back in the room during talk time. I'm starting to fine-tune my "get overly excited and fail to modulate my volume" character.