I AM LOVIN' THIS BACON!

This is some fantastic bacon. Ain't it all? I want to crumble this up on a donut. I want to put it in a bowl with milk and eat it like cereal.

I have a bacon tattoo.

I run a bacon blog.

I am hogged up!

Cooking up some bacon right now. Going to weave it into a dreamcatcher and I hope my dreams are of bacon.

Bacon isn't a hobby, it's a lifestyle. 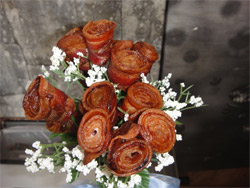 You can never have too much bacon. I dug a ditch in my backyard and filled it with bacon. I made a palace of bacon on my Minecraft server I run for bacon lovers. My wedding was bacon themed, with a ring made from woven bacon. The flowers were bacon. I married bacon. My bacon wife will soon give birt h to our first bacon baby and I will place that baby in a bacon crib. Epic meat baby.

Booya! Some people think talking about bacon all the time is hilarious. It's not. It is super serious as hell. I take this bacon seriously. You'd better too when I'm around.

I would throw bacon parties and invite all my friends from work, but I don't have a job so it's a 24/7 bacon rave in this house. Got some bottles. Got some tweezers. Gonna put some bacon ships in some bottles. People mace my eyes and call me a crazy idiot and tell me to shut up about bacon. You know what their problem is?

What they need are some mushy monster truck mounds of bacon, greasing up tablecloths, attracting varmints, reminding them of the purpose of being alive. You get that burger out you got to hog up. That's what I call it. Equip that burger. Get some on your pizza. Sprinkle some on your pork chops. Drape it on the coffin of your brother to honor his service. Hog up that hero. Put your pappy in the ground with some crunchy pink pleaser like a wreath around his head. G.G. Allin him with stinky strips of applewood smoked goodness to hog up for the afterlife. 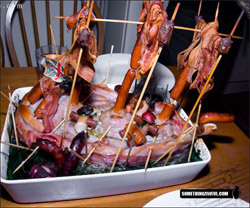 I'm just kidding. I don't love bacon that much.

Tweet me pics of you eating on some bacon or making something out of bacon or recording what bacon says. No more prank pictures. This won't be like last time.

We are in this bacon game together. We are all working in this bacon realm, advancing the cause of bacon, striving to improve our standard of bacon, increase the bacon knowledge and approach the bacon singularity. This is the moment when we will become bacon eating itself. The ourobacon.

Until then, keep the bacon vlogs coming. I am watching them all.

Zack "Baconbro" Parsons is a blogger, vlogger and in his spare time performs with a pirate rap-rock group called Booty Count. He is the guy who does a Jack Sparrow impression and says "Mmmmmhmmm" in agreement during the songs. He is also the author of The Bacon Diet: 30 Days to More Bacon Turned Into Energy and Body Meat.