I wrote that back sometime in late 2001 or early 2002, shortly before the Ragnarok Online servers were taken offline and stricken gamers were forced to turn to Everquest or Asheron’s Call or one of the other half dozen MMORPGs where you slog through an endless leveling treadmill until something happens that upsets you, at which point you shoot yourself and give your parents the opportunity to win fabulous cash prizes by suing the game’s publisher. I had already realized I would never enjoy the game and uninstalled it by that point, so it took me somewhere between 17 and 18 seconds to forget Ragnarok Online ever existed. 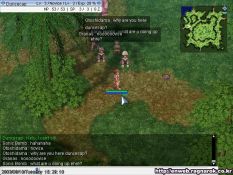 These veteran adventurers were awfully mean to me when they saw that I was a novice.However, when I noticed my Pulitzer-winning “LPRO” documentation on my hard drive a few days ago, I decided to check and see if the game was still offline. Lo and behold, it had apparently been brought back online and made a comeback in the past year! Figuring Ragnarok Online would fit perfectly into the whole “games that are not very good” motif we have here at Something Awful, I proceeded to the official site and attempted to download it. Unfortunately, clicking on the link to download the 570M client gave me a 404. I then tried the ten links below it, each of which linked to a separate 57M chunk of the client, and all ten links led to 404’s. Not one to be deterred so easily from polluting my hard drive with this terrible game, I scrolled down and tried the three mirrors listed below. None of them worked either. I eventually managed to grab the client from Fileplanet, but I now knew that I was dealing with a company that can’t even put working links to the client on the game’s official website, and that definitely did not bode well for my Ragnarokking experience.

Next came the patching process. I became cautiously optimistic when I saw that an automatic patcher was included and appeared to be downloading the necessary files to update. However, the feeling of “Boy, I sure am feeling cautiously optimistic right now!” rapidly changed to a feeling of “Wait, what the fuck?” when after downloading every file and displaying a File Download Complete message, it did this:

It would pop up three separate dialog boxes full of gibberish, one after the other, and then crash. This happened the first three times I tried to patch, then happened again after I reinstalled to try and fix the problem. I looked through the official Ragnarok forums and didn’t see any mention of the problem, so I took the only logical course of action and went to sleep. 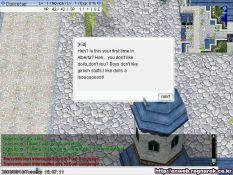 I originally tried to talk to this girl until I found out she was just an NPC who spews an endless stream of annoying dialogue. Then I tried to call her a bitch but the built-in filter thwarted me. Blast!When I woke up, the first thing I did was fire the computer back up and try patching again, and this time it worked perfectly. I have no idea why it suddenly decided to work and I’m really not too concerned at this point. This allowed me to get to the final stage before I could actually play – paying. Yes, on June 1st, Ragnarok Online officially became a pay-to-play game. But the worst part isn’t that I paid $12 for an entire month of a service that I am not going to use from now on if I can possibly avoid it. No, the worst part is that I submitted my credit card number to a company that can’t even make working links to their own game, let alone keep private information like credit card numbers secure. I was hoping maybe they thought about that and hired someone competent to handle their credit card transactions, but that hope vanished when I looked at the drop-down boxes to enter the expiration date and saw that they spelled “select” wrong. But I gave them my credit card number anyway, because they seemed trustworthy. I also routinely give my credit card number out to Nigerian men who need to transfer money into the country so that I can save on long distance and see horny teenage sluts while enlarging my penis naturally and getting a 4.3% APR home loan.

After all that, I was absolutely thrilled to finally log in and discover that with a few changes, it's essentially the same horrible game I tried to block from my memory over a year ago. However, I should point out that I have disliked literally every MMORPG I have played, so if you happen to be a MMORPG fan then Ragnarok Online may appeal to you. But out of the several I have tried, I hated Ragnarok Online more than any of the others, and if you do enjoy MMORPGs you would probably be better off with Everquest or one of the other games that have been around for years. But taking advice from me on which MMORPG is better than another is like asking Hitler which color yamulka you should wear for Passover dinner.