Ragnarok Online is a massively multiplayer point-and-click RPG, meaning you can play it without having to use cumbersome things like your keyboard or your brain. First you select a character. You can choose from a grand total of 1 starting class, and you can have 7 unique looks, so no matter how you look you'll have a lot of identical twins in the land of Ragnarok. Then you get to play the game itself, which is an absolute blast. First you find an enemy, meaning anything wandering around that isn't a player. Then you click on it, and your guy runs over and kills it. Or if your guy is weak, he gets killed by whatever it is you just tried to attack. Once you've done this, you've experienced the entirety of Ragnarok Online's deep and complex gameplay. If you click on enough enemies, your guy goes up a level, which means you are a little bit stronger and you can go click on some slightly different enemies without dying. You can get the same experience by going to the nearest park and kicking gradually bigger and bigger rocks. People in Korea can't do this, since rocks have been outlawed in Korea ever since a protestor hit Kim Dae Jung in the eye with one in 1996, but that's no excuse for this game getting played in America. 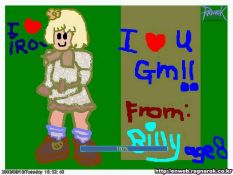 Here's another beautiful loading screen. Nope, I'm not kidding about this one either.If you want to investigate the many wonderful things Ragnarok Online has to offer, you can check out their website. You can select one of three languages - Korean, Japanese or English. The English version looks like it was written by a 12-year-old Chinese boy who was clubbed senseless, shipped to America in a sealed cask and allowed 5 minutes to read a Berenstain Bears book to learn English before being chained to a chair and forced to write a website on a 386 laptop with a monochrome monitor that randomly turns itself on and off. Either the money they spent drawing the seven different characters drained their whole budget and they couldn't afford a translator, or the translation is perfect and the people who wrote the game can't even speak Korean properly. Perhaps Gravity is made entirely of disgruntled tech workers who were fired by the Korean government after they were found working on a project that didn't involve nuclear weapons. The front page gives you such wonderful news bytes as Server doesn't stabilized yet and `ragnarokonline.it'is NOT an official website. But the real fun is in reading the descriptions of the different enemies you get to click on.

Fabre: Larva of Creamee. Good for novice to deal with. Sometimes it becomes a Pupa.
Condor: An old bird living in desert. It causes pity for people by flying so weak. But it returns attack fiercely when attacked.
Golem: Created by a wizard's spell. Stone man. Heart made out of rock. It loves nature and is easy-going. Physical attacks do not work on it. 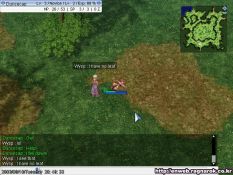 If there's one thing we dead people hate, it's wanderers who come up and start talking to us when they don't have a leaf!Similar broken-English phrases direct you to download the client, and then run 104 (yes, 104) patches on it. If you are somehow stupid enough to do this, you will be like Lance. As I may have mentioned once or twice, Lance plays Ragnarok Online. But why does he? Was he dropped on his head in the middle of I-405 as a baby? Did he suffer a tragic accident in which he lost functionality in the part of his brain he would normally use to distinguish between good games and bad games? Is he secretly a Korean? There's no way to tell for sure. But do your part to help quell this rising evil. The next time you see Lance, point at him and then, in the tone of voice you'd use to tell an inmate he didn't make parole, say "Lance...you know what? You play Ragnarok Online."