Sunday, Mar 16, 2003 by Mark Polonia / Jon McBride
A note from editor Rich "Lowtax" Kyanka: It's no secret that Something Awful embraces and enjoys amplifying the adverse effects from the absolute most retarded forms of media in circulation. We poke fun at everything, ranging from horrible websites and embarrassing games, to "incorrect" religions and people who dress comical and differently. If it's bad, we want a part of it, and this type of thinking has made films from the infamous Polonia Brothers (creators of such videos as "Feeders," "Feeders 2," "The House That Screamed," and "Bad Magic") the cult icons that we psychotically view them as. Simply put, every Polonia Brothers movie is awful. Awful directing, awful acting, awful sound, awful plot, awful everything... including awfully entertaining. Although we may slightly express a somewhat negative vibe towards these "eternal films in progress," we do admit to fostering a certain love-hate relationship with them. Simply put, these movies are great at being lousy. If you rent a random horror or science fiction video and think it will be some big-budget Hollywood production with a finely woven plotline and a enthralling plotline, you'll probably be disappointed. However, you know with 100% strict confidence that any Polonia Brothers film is going to be bad; the entertainment lies in just how bad it turns out to be.

I've been emailing Mark Polonia and Jon McBride for a month or so now, simply discussing their films and how they are able to complete entire movies without exceeding the monthly cost of my apartment rental. Both have a very good sense of humor about their work and neither take it quite seriously, which is definitely good because otherwise they'd probably be incarcerated by this point in their life. I offered Mark Polonia and Jon McBride a chance to respond to my early review of their most (in)famous film, "Feeders," and they took advantage of it. Allow me to present to you "Hot Off Hollywood: Inside the Polonia Brothers / Intercoast Films," which was honestly sent to me by Mark and Jon, who took time off their busy schedule of making a movie about Bigfoot or UFOs or Carol Channing or whatever the hell they're doing. I swear to God they really sent me this, so do them a favor and go buy one of their films so they can afford to keep making things for us to laugh at. 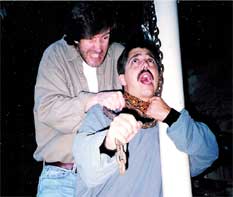 Greetings fellow readers and film freaks. Welcome to the first in a series of updates / ramblings / entertaining detours in the literary field from Polonia Bros and Intercoast, the people whose films are roasted on a semi-regular basis here at Something Awful. We will keep you current on what's new in our film circle while attempting to defend ourselves (if possible) from our arch nemesis (all the SA reviewers) who represent all that is Unholy and Right™ in the film critique world. For our fans (all three of you) here is a list of the “what and where” of Polonia Bros / Intercoast DVD releases for this year.

All these fine titles can be purchased at www.B-Movie.com. Now that the shameless plug is done, let's look at current news. In May of this year, we will be in production on "AMONG US," a bigfoot movie done in our usual style (no… not terrible, cheap, unwatchable). There's already a song for the movie that should accompany this article, and we are even gonna give a cheap plug to the folks at SA who represent all that is, once again, Unholy and Right™ in the film critique world. Not that that will make them go any easier on our movies.

Finally, let me clarify something: Polonia Brothers represents myself, Mark Polonia and twin brother John (not Jhon as erroneously printed on a video sleeve by morons who have the combined intelligence of a well-used eraser). Jon McBride represents Intercoast Productions. Polonia Bros. and Intercoast team up, thus making Polonia Bros / Intercoast movies. The folks at SA seem to have a hard time keeping all of this straight, which is odd when you consider they have dissected our films one frame at a time and stand for everything Unholy and Right™ in the film critique world. Maybe it's the mind-numbing affect our movies have? These boys should have to sit through the production and editing of these classics, then we'll see what they're made of! Let us begin!

"FEEDERS" was reviewed by one, Rich "Lowtax" Kyanka. Let me start out by saying everyone is entitled to an opinion even if they're wrong. And even though Rich, who represents all that is Unholy and Right™ in the film critique world has a keen eye and humorous wit, one can't ignore his name. I'm certain he's a nice chap, so we won't even hold the fact that he's from Missouri against him, although we could. The middle name almost immediately raises red flags… "Lowtax?" To really understand this, lets break it up into a compound word. If any of the reviewers at SA who represent all that is Unholy and Right™ in the film critique world ever passed sixth grade, they'll know what I'm talking about when I write "compound." "LOW"- which could refer to the physical position Rich is in when not destroying brain cells watching our travesties, and "TAX" - something Rich has never had to pay in his life because he never held down a regular job. "LOWTAX" as one word could simply refer to his brainpower. The "Rich" and "Kyanka" warrant no farther dissection.

Under this strict and unyielding sliding scale of film review by the folks at SA who represent all that is Unholy and Right™ in the film critique world, even a movie like E.T. couldn't get away with at least a -23. Guys… come on. Stop hurting yourself by creating a number system based on your combined IQs. I know it's all our fault your brains are the way they are, and currently my paycheck is being docked so a small amount can go towards your recovery, but it's not fair to other lousy films not made by us! Maybe a 1-10 score would be appropriate? 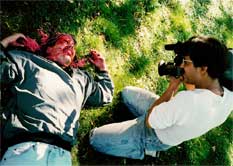 Before we defend ourselves to other viewers and the SA crew who represent all that is Unholy and Right™ in the film critique world, it's only fair everyone know the real story behind "FEEDERS." This isn't a way for us to make excuses for ourselves or the film… okay, maybe a little itty-bitty excuse. First, I really admire the review of "FEEDERS" at SA. It is honest, if not a little harsh, and funny, if not a little insulting. But hey, people are entitled to say what they want, even if their four-year-old sister helped write the review along the way. We have no animosity to SA and won't hold them responsible for the next five sequels "FEEDERS" will produce thanks to them bringing this nugget (of what I won't say) back into the limelight. Here we go…

"FEEDERS" was a shot on video project that originally started out as "INVASION." Once we saw the budget ($500 bucks, no kidding) and the aliens made for us (who couldn't conquer a girls locker room), we knew we had to change the script. I scaled down the story and wrote something that could be shot in about five days, which is how long it roughly took. Locations were free until the cops showed up and beat us with nightsticks, and actors were… well, recruited in ways I shan't discuss in public. All this is told in explicit detail on the DVD commentary. Jon and Jhon (oops! I mean John) starred because the local high school acting troupe were in a nearby town performing at a nursing home. I, Mark, manned a lot of the technicalities, or, I mean technical aspects. I also drew the startling eye-witness accounts that opens the film and agitates the reviewer Rich at SA, who represents all that is Unholy and Right™ in the film critique world.

We intentionally tried to make a campy throwback (if I can use that word) to the sci-fi films of the 50s, except theirs turned out better. Blockbuster actually did pick it up, and although there were a few disappointed viewers, well okay more than a few, BB laughed all the way to the bank as "FEEDERS" became their #1 independent rental for 1996. You can take that however you want. Honestly, "FEEDERS" didn't deserve a Big BB release, but then again, neither do most Hollywood products. Luck, what a fickle thing. Most people who have animosity towards "FEEDERS" always say they could do better... well, go right ahead!