There was a Taco Bell at the bus terminal in Trblej. I had something called a "Mexi-Melt" that I assume is a rough approximation of what you would get if you used a heat ray to melt a Mexican. With cheese. It did not mix well with the homemade vodka I drank from a surplus military boot. 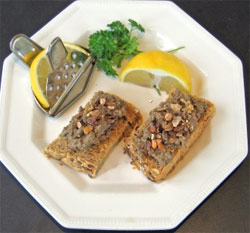 I spend a lot of time jamming greasy street food into my mouth for my Travel Channel show, and I love that, but it was nice to sit down for some fine dining. The Culinary Institute of Azerbaijan is housed in an unfinished atomic cooling pylon left derelict when the Soviets pulled out in the early 90s. It's a setting about as inviting as a corn dog party a Rachael Ray's house, but at least at the CIA you don't have to pay a girl to spit in your face. Besides, Master Chef Zbyg Kyrel is considered one of the finest chefs south of the River Kur.

Chef Kyrel's students cooked a magnificent eight course meal. Of the courses the amuse bouche was probably my favorite, followed closely by the entrée. The amuse was poached fox eyes in a mistletoe berry gelee on a lightly fried sawdust and man-dander crisp. It was the perfect way to awaken my palate for the meal to come.

We had mashed tubers that looked like they came from a Triffid, loin of shark and lark brain foam, a postmodern take on baklava that incorporated nine different types of spinal cords. There were so many dishes and duos and side-dishes it was mind boggling.

In the end, the crew agreed the winner of the night was the orangutan hand vodka confit. The shaved orangutan hand was slowly cooked in a mixture of its own juices and apple vodka to the point that it fell apart on contact with the tongue. Even the plating was amazing, the oily hand palm-up on a plate, clutching a browned and hollowed apple filled with Pripyat catfish caviar.

A so-called "BK Broiler" at a Rangoon Burger King. I think "BK" is an element forgotten on the periodic table, something mined very close to hell, that they then "broil" in a microwave until all of the juices have been replaced with gristle nodules. The sandwich was so appallingly bad it made me homesick for an Arby's pile of wet sheets of beef paper on a soggy bun. 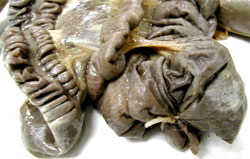 Secretive post-modern Nazis may have a grip on Burma's government, but the food in this impoverished country lives a happy and passionate life free of the health code Nazis. Carts and food shacks line the streets of Rangoon, serving up noodles, exotic meats, and pretty much anything you could hope to see on a stick. For a real treat I followed a Google map Ruhlman printed out for me that took me to the deepest squalor of Rangoon's outer fringe.

We never found the shack called "Okay America" that Ruhlman had described as "the best cat head soup you have ever tasted", but I think we stumbled upon something even better. We had something called Bhet made by a woman gasping and holding a bloody towel to her head. 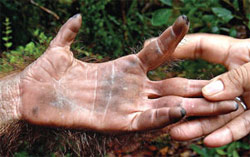 She cooked in a bucket over an open fire, cracking open parrot eggs into the bucket. She would pause every so often to retch into another identical bucket right next to the fire pit. It was a game she was playing in my peripheral vision. Did she just puke blood into the bucket she's...nahhhhh.

After a few minutes she got up and chased a stray dog around the yard moaning in apparent pain. She cornered the mutt and, after a lengthy tug-of-war, wrestled a strand of intestine from its jaws. She added the gnawed guts to the stewing bucket.

The resulting meal was exquisite. We shoveled innards and scrambled parrot eggs into our mouths. The food had a delightfully gooey mouth feel, almost like pencil erasers poached in hagfish mucus, and the flavor profile was enhanced by the bitter mush of berries that burst from the intestine with each bite.

I tried to ask the woman for the recipe, but she was nowhere to be found. One of the translators said she collapsed and was dragged away by a pack of dogs. So it goes. Guy Fieri gets two TV shows and a TGI Fridays deal for adding Tobasco and cheddar cheese to refried beans and this lady fights a dog to create the best meal I have ever eaten and then dies in an alley. I don't blame God, I blame the Food Network.

What's the moral of the story, kids? You can travel to the darkest depths of a Central Asian nightmare and find a better pot of food being cooked by a leper than Applebees is serving up. If you're looking for a bad night of eating look no further than your own neighborhood. If you're interested in living a little, getting to know the way other people eat, well, there's a great place in Saipan that knows just the right way to boil a dolphin's skeleton.