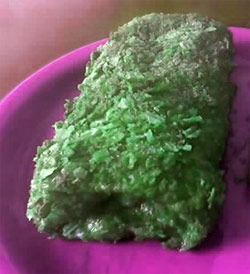 A Big Mac eaten between shoots at a Cardiff McDonald's. It was a greasy, fatty, and grayish-brown lump of wet meat slathered in mustard-colored sauce I'm guessing was produced from industrial solvents by a machine that has to be water-cooled. You truly get the sense of America's reach when you're gulping down poorly-cooked American beef covered in American processed cheese substance while a doughy man with rat eyes yells at you in Cymraeg.

A Welsh Burrito, made popular in the Welsh bog lands. This is a real working man's meal, a dense and high-calorie satchel that a lot of Welsh mud diggers carry in leather pouches secured around their necks. The Welsh Burrito is made from a mash of boiled dandelions and crow's beaks wrapped in a smoked frog skin. The hardy Welsh dive into the bogs and catch the frogs in their teeth.

The beaks cut your gums as you bite into the wrap and blood is the main source of seasoning. It sounds gruesome, and it is, but it's delicious. I've tried to recreate it in the kitchen with squid beaks and seaweed wrapping. Unfortunately, squid beaks don't cut you up, they're just indigestible.

Skittles? I don't know what a Skittle is, but it tastes like iodine and corn syrup. They are the sort of miserable pellets that sink to the bottom of an Easter basket when you're a kid and you don't even care enough to untangle them from the grass. Handed to me by my guide, Zyrikikov, during a truck stall on a particularly treacherous mountain road. 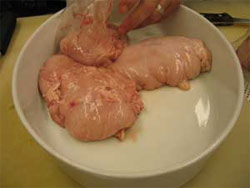 "If you want some real native cuisine," Ruhlman told me over the phone, "then you need to look to Leng. Sweetbreads worth dying for!"

Based on Ruhlman's advice I was absolutely set on visiting the old Soviet city of Leng. It's in central Kyrgyzstan, far away from any of the other settlements and situated on an isolated plateau high in the mountains. Leng used to be a manganese mine, but there were a lot of mysterious accidents and deaths in the 1960s and the Soviets abandoned the region. The people left behind are the hardy and hard-working Tchoo peoples of Leng. These tribesmen were there long before the Soviets and they now gladly inhabit the industrial ghost town left behind.

Zyrikikov, my guide, did not want to take me to Leng. He seemed hostile to the idea, almost hysterical. The bribes the Travel Channel paid were obscene, but we bundled into a 30-year old cargo truck and trundled up the winding mountain roads. 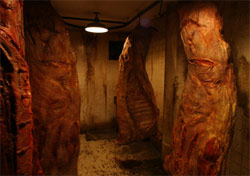 The Tchoo people all have the same bow-haircut. Visiting Leng is like visiting Bizzarro Liverpool at the fashion heights of Beatlemania, only all of the teenage boys are four-foot tall goatherds from Central Asia that always smile. It's happy creepy there, a black velvet painting of the Osmonds by Hieronymus Bosch.

Despite all the smiles, there were some hiccups getting our meal.

We met with some of the elders in an old cathedral. The church was composed of very unusual angles in its architecture and combined with the cloying scent of incense it was fairly nauseating. In other words, it was the Rocco DiSpirito of Eastern Orthodox churches. I asked for the legendary sweetbreads Ruhlman had described, but they were not forthcoming. Finally, one of the Tchoo elders agreed to take some of the camera crew and Zyrikikov on a tour. A few hours later a different group of Tchoo returned with very fresh sweetbreads. They were amazing! They melted in my mouth and provided a savory counterpoint to the thick and sweet wine they served.

We never did find out what happened to half the crew, but our driver insisted on departing before nightfall. Something the translator could barely understand about the "barrier weakening beneath the light of the moon" and "strange flutes". It was a memorable meal and I'm sure the Travel Channel got the crew back safely.