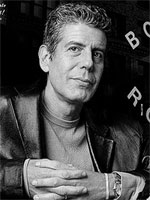 Chef Anthony Bourdain is the best-selling author of Kitchen Confidential: Adventures in the Culinary Underbelly, host of the Travel Channel's Anthony Bourdain: No Reservations, and frequent guest judge on Bravo's culinary contest show Top Chef. He maintains his own blog detailing his life and experiences.

Those two questions haunt me like a remoulade I left on the counter overnight and ate anyway. Fans want to know the answers. I don't blame the fans, they don't know what I said the last 50 times I answered, they just know I put gross things in my dumb face for their amusement. What's worse, my answers vary from day to day. I'm not the sort of degenerate that has permanent favorites and least favorites. I tend to look back on a certain day like a junkie looks back on a fix. Was it good? Was the dealer good? Did they cut it with too much powdered baby aspirin?

Lately I've been doing a lot of traveling in the forgotten parts of Asia, sampling the local cuisine and trying to get to the bottom of the food scenes in some of the poorest countries on earth. And I've been to Wales. These are the favorites and least favorites freshest in my mind. They're the meals I can still recall with some degree of accuracy, which is sort of incredible because I have the memory of a guppy prone to blackouts.

A Snickers bar at the airport. It was slightly past its expiration date and had the flavor and texture of peanuts preserved in wax. It nearly strangled me as it descended my gullet and it just sort of sat there, choking off my digestive process with its corporate nougat. 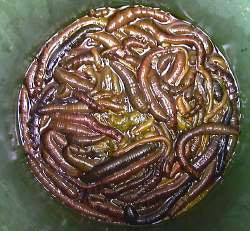 Michael Ruhlman emailed me just before I left New York and convinced me to check out one of Uzbekistan's up-and-coming hermit chefs in the recently de-mined zone to the west of Navoiy. I'm so glad I braved unexploded artillery to check him out. I stepped over rolls of rusty concertina wire and negotiated a landscape of wrecked Eastern Bloc cars. There was no sign for Thyom's, just a yawning hole in the ground surrounded by crude cooking equipment.

After shouting for several minutes a hump-backed dwarf dressed in rat pelts scurried out of the hole and, without prompting, cooked us one of the best meals I have ever eaten.

Earthworms in a blackened cat food can, cooked on a discarded toilet lid using an acetylene torch. The skins were blackened and crunchy, but the simple stomach of the earthworms were loaded with loamy richness. When I asked him for the recipe he spit at me and ran back down his hole. Sometimes it's eccentrics in former war zones that have the rawest cooking, the most naked attachment to the food they eat. It's honest food from honest people. Even if I have to get spit on to eat something like I had at Thyom's it was all worth the trip.