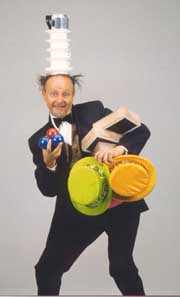 Out of all the failed magicians currently touring the circuit, Tommy El Camino is by far the most famous. With over 20 years of unsuccessful magic tricks and failed attempts at wowing an audience, Tommy El Camino has mastered the art of shocking and amazing crowds. His last national tour, "Tommy Gonna Knock You Out", grossed nearly enough money to replace the stolen wind chimes outside his trailer home. Heralded as "the last true entertainer" (the FAKE Las Vegas Sun and Times) and "the man who lurks in my bushes and stares inside my bathroom window every time I undress" (Kathy Remmington), Tommy El Camino has won the hearts and souls of audiences worldwide, usually without their consent or awareness. Make sure to attend Tommy's latest show, "My Life is a Black Void of Despair", in which he demonstrates the following exciting magic "tricks":

The "I Know What Card You Just Picked" trick - After letting an audience member draw a random card from his deck of "magic" playing cards, Tommy El Camino uses a checklist of all available cards left in the deck to determine what card is missing. Audience members are often enthralled and excited beyond belief, especially once the live explosives strapped to their chests are disarmed. The grand finale of the trick involves Tommy throwing the entire playing deck at the participant's head.

"Hey, That Coin Just Disappeared!"- Tommy takes a nickel from somebody in the audience, opens the window, and throws it as far as he can. Then he triumphantly proclaims, "there, your damn nickel is gone. Vanished. It's magic, so shut the hell up."

"The Juggling Phenomenon" - The ever-amazing Tommy El Camino grabs a brick, apple, and chainsaw, then attempts to juggle them while taking bites from the apple and licking the brick. Some critics have dubbed this trick as merely, "throwing a bunch of crap into the air and then running away when they come back down again," but Tommy sees it as "audience participation". He uses the same excuse when the chainsaw comes down and severs the arm of the person in the front row.

"Oh Sweet Lord in Heaven, My Eyes are Burning!"- Tommy makes various chemicals from his meth lab disappear and reappear in the laps of audience members. Free samples of the finished product are given to all the survivors.

With a ticket price cheaper than the cost of your average lawn tractor, Tommy El Camino's show is a definite "must see" event that will permanently scar your mind... and your heart. Look for Tommy's unknowing appearance on the next episode of "COPS".