FBI to American Public: Anthrax Only Sent to 'Important People.'

FBI to American Public: "Anthrax Only Sent to 'Important People.' Not You."

FBI claims Anthrax only sent to "cool, important people." Members of general US public scientifically proven to be neither.

Attorney General John Ashcroft points out how stupid most people are to think that terrorists give a damn about them.

Washington, DC- In a recent press conference, Attorney General John Ashcroft and high ranking members of the FBI candidly lectured the American public in reaction to the recent Anthrax scare that has been haunting the United States. Ashcroft pointed out the fact that only high-ranking and influential people were sent the deadly bacteria... and most Americans are neither.

"Listen people, stop calling the FBI and police department every time you find some stupid white powder under your sink," Ashcroft demanded. "That white powder is simply that; white powder. We don't have the time, money, or resources to drive down to your trailer home at 1400 Bumfuck Lane every half hour so we can swab your filthy bathrooms for microbes. Instead of seeing a lump of white powder and freaking out, maybe you should try snorting that white powder to see if perhaps it can chill you out." Ashcroft then described how the FBI's central phone line system has been constantly tied up for the past two weeks, suffering under the intense pressure and heavy load of calls from the Anthrax-fearing public. These disruptions can cost government agencies up to $1.5 million per investigation, sucking away crucial resources and funding.

"Try using your bloated, grease-covered fingers to turn on the news once in a while. Have you noticed how the only people to receive Anthrax have been news reporters and influential government officials? Do you see a pattern here? Can you count the number of minivan-driving PTA members who have been mailed Anthrax? Do you notice how many Jiffy Lube oil change employees were sent the bacteria? Anthrax doesn't grow on trees, you know, and the individuals responsible for this scare wouldn't waste their precious death spores on your fat asses just so the local neighborhood watch patrol will freak out and stop opening their Publisher's Clearinghouse Sweepstakes for a couple days." Ashcroft pointed to a chart that illustrated the difference between individuals who were sent the Anthrax bacteria and members of the general public. 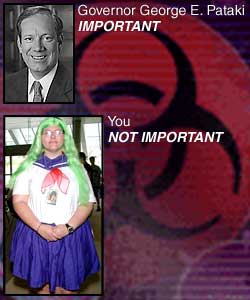 FBI officials provided this chart to help Americans realize they aren't important enough to receive a deadly bacteria in the mail.

In related events, the "102.2 FM Morning Zoo Krew" was recently arrested for illegally obtaining military samples of Anthrax and intentionally infecting themselves for what they admitted was a "massive ratings and publicity stunt." Rick "Mad Moon" Michaels and his co-host Danny "The Manny" Reed allegedly infected themselves with the bacteria, then claimed on air that they had received an anonymous letter that contained the deadly white powder. "This puts the 102.2 FM Morning Zoo Krew right up there with America's top news reporters and government officials!" Rick proclaimed during one broadcast, shortly before pressing the "dog farting" sound effect. "These terrorists are trying to silence the 102.2 FM Morning Zoo Krew because they know laughter is the best medicine for an ailing country... and we've got the most hilarious hijinks in all of south Detroit!" Reed then proceeded to push the "jungle roar" sound effect repeatedly while his producer giggled nonstop for 10 minutes. Ashcroft warned against these types of stunts.

"You cannot 'cash in' on Anthrax. Any individual or individuals willingly infecting themselves with Anthrax for publicity or higher ratings will face harsh penalties. Anthrax isn't here to make your career or get you lucrative book deals. Anthrax has only been sent to cool, important people, and if you're infecting yourself then you're not cool or important, you're just a cheater. And America hates cheaters as much as they hate terrorists."