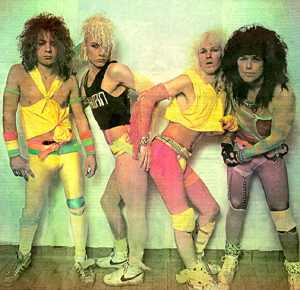 German heavy metal rockstars Die Heißen Hosen have been impressing and amazing audiences since their smash 1978 single, "Erotic Assembly Line Slave", which sold over 5,000 copies and caused them to be labeled, "The most exciting act since 'Disembodied Tarantula Capitalist'" (The Gunter-Otto Press). Ever since breaking up after the release of the incredibly successful "It's Ghosting Time" record in 1981, Die Heißen Hosen has been living in relative obscurity... until now! Yes, we found the plastic spider ring factory the members Die Heißen Hosen were working at and now feature a live set by them every Tuesday and Thursday evening! Along with their guitars and drums, members of the band also bring along exciting tools to enhance the concert-going experience, ranging from jackhammers to nailguns and disproportionately large marital aides! When attending the show, make sure not to bring your children, as lead bass guitarist Yorg Stepensoff cannot be within a 500-yard radius of anybody under 16.

If you're not convinced that Die Heißen Hosen knows how to "rock the roll" yet, take a look at the lyrics from their latest release, "Grub Social Feud"

The lamp turns on a switch false signal of electricity!
Here comes the revolution and(something that sounds like the word "harpsichord")
Don't fret my sweety, a love that dies within the corpse of Hades
is not too good for a(something that ends with the lead guitarist saying, "wad wad wash")
and you're all out of mother's milk you fraudulent socialist propaganda machine!"