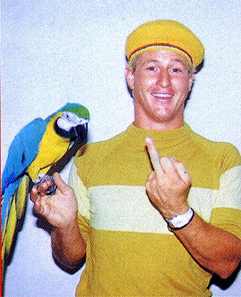 It's no secret that parrots are among the most intelligent and loving animals on the Earth. Professional animal trainer (note: he is not really a professional) Michael McKinley has trained his special pet parrot "Swindly Steve" to perform a wide array of hilarious tricks and antics! Get ready to laugh, because once Swindly Steve takes center stage, comedy is on the menu! No really, it's on the menu, listed below "appetizers".

See Swindly Steve racially insult various members of the audience! His trademark line, "Stevie wanna cracker... and she's sittin' in the second row!" is often followed by the drop-dead hilarious antics of Swindly Steve leaping off his perch and gouging out the eyes of the pasty white girl in the second row! Fun and excitement for the entire family, assuming the fat white girl isn't in your family!

Swindly Steve is famous for the intensely comical magic tricks he can perform with one of your major credit cards! Don't worry if you left your wallet in the hotel room; Steve can easily fit in the ventilation ducts which lead to your room! If you hear the sounds of claws scratching metal plates in the middle of the night, just go back to sleep! It's probably nothing!

Prepare for some high seas laughter as Michael McKinley engages in one of the most animated conversations you'll ever see - with his bird!

...and that was just from the opening 10 minutes of each show! Make sure to reserve seats for the next Birdman Show! You won't regret it! Unless you accidentally attend!