Half Life 2 User Created Maps: The First of the Worst

Wednesday, Dec 08, 2004 by Zachary "Spokker Jones" Gutierrez
Over two weeks ago Half-Life 2 was finally released to the world. The title, an excellent science-fiction themed first person shooter, received critical acclaim from a number of magazines and online publications. While the game itself is somewhat short and the only included multiplayer at the time was the shitfest that is Counter-Strike, many people are hopeful that user created mods and maps would fill the void. Of course, this takes time. It takes a very long time to make a decent map that people will actually want to download and play. And with the new advanced features of the Source engine, making a good Half-Life 2 map may take double or triple the amount of time it took to make a good Half-Life 1 map. Today's feature focuses on the people who don't quite understand that concept. Hellbent on getting the "first post" on the Half-Life 2 mod and mapping community, the following "map makers" have decided to release their tutorial quality creations to the world. Folks, I present to you the first of the worst, the first of what will be many terrible Half-Life 2 maps in our future. This is just the tip of the iceberg. 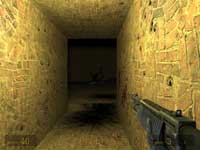 3rooms is a siezure inducing romp through cubes and rectangles! A good time will be had by all. Of course, they'll have to change the definition of "all" to "none".3rooms
Author: Unknown. Maybe it's better that way.
Fullbright?: Fullbright, then no bright, all within a matter of milliseconds.
Spelling Errors in Text File: No text file included. I guess it was past the map maker's bedtime.
Pain Level: Sitting in an oven set to 400 degrees while testing video games for a living.
Overview: Much like the way forum morons enjoy getting the "first post" in a discussion thread, the maker of this map first-posted this abomination all over the Half-Life 2 community. The first thing you'll notice about this map is the insane amount of flickering lights. It's like being in sixth grade all over again and the class is getting a little too rowdy and the teacher tries in vain to restore order by flicking the lights on and off repeatedly. When that happened I simply smacked that bitch upside her head and order was restored. That's something I can't do to the maker of this map.

After I recovered from my first siezure I managed to press on to a small tunnel complete with flickering lights that managed to be more annoying than the first. So you're telling me I get to have siezures and crouch slowly through a long ass tunnel that is also flickering uncontrollably?! Sign me the fuck up! This is a really scary map folks. At least it would be if I weren't having fits of muscle spasms. After I saved a pile of barrels from the evil zombies I collapsed and hit my head on the side of my desk and died. Thanks 3rooms. 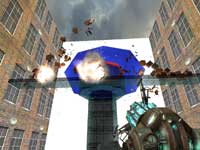 At this point in the map your CPU will catch on fire and blast off to the moon.Alyx Basketball Beta 2
Author: Dr. Nick
Fullbright?: You bet your sweet virgin ass.
Spelling Errors in Text File: No text file, thank Christ.
Pain Level: Losing your child at birth.
Overview: The first thing you notice about Alyx Basketball Beta 2 is that after loading the map the game has suddenly turned into a gallery slideshow. You could take screenshots of this map and scroll through them in ACDSee and you would get the exact same experience as actually playing it. For whatever reason, be it stupidity or inbreeding, Dr. Nick has decided to place a ton of boxes and barrels on a high platform and set them up to topple all over eachother as soon as the map is done loading. This is akin to anally raping your CPU with a plunger. You might as well go out for coffee with some ho you met at the bus stop because it's going to take that long for your computer to catch up.

Once the game returns to a playable frame rate get ready for hot hoops action because you are now a star in the ultimate black chick chucking championship! Give it your all as you send lifeless black women hurdling to their deaths at an alarming speed! Can you score the winning goal and earn yourself a place in the black chick chucking hall of fame? Find out with this shitty map! 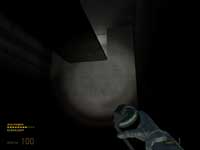 Oh boy! I fell into a pit and now I can't get out. This is the kind of raw excitement that Half-Life 2 lacked.Convex Beta
Author: Matthew Klingenberg
Fullbright?: No.
Spelling Errors in Text File?: You better believe it.
Pain Level: Having a child's swingset shoved up your rectum and then ultimately the child.
Overview: Just because you call something beta doesn't excuse it for being a pile of shit. When you uploaded your map to a website where people could download it, did you really think that they would want to see your first map that you pieced together in 5 minutes after you figured out what a computer is and how it works? Great, you know how to make concrete rooms with prefabricated props inside of them. Give yourself a gold star! See if you can find the map's homage to the double vision effect that occurred when you went outside of the map in Doom. My time with Convex Beta was admittedly short however. I eventually fell into a pit and had to exit the game. Hey, this map ended just like my last relationship, in a pit of dispair. 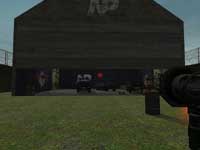 This map goes where no map has ever gone before. To a barn.Disgarded Garbage
Author: Unknown
Fullbright?: Maybe
Spelling Errors in Text File: None. Map maker hasn't learned his ABCs yet.
Pain Level: Playing Convex Beta while bamboo shards are stuck underneath your fingernails.
Overview: Many of the first Half-Life 2 maps are simple locations in which a ton of props are placed so that the player can knock them around with the physics gun or some other weapon. I don't understand the initial appeal of these maps. I mean, it's not like Half-Life 2 didn't already have enough shit to play around with. Piece together a few structures and throw a bunch of boxes and barrels in there and you got yourself a map! The Source engine will do the rest. I wonder how long it will take for maps like these to stop being released. Holy shit, another map in which I can throw milk crates at a tree?! FUCK YEAH! At least the map's name is accurate. This is garbage. Discard immediately. 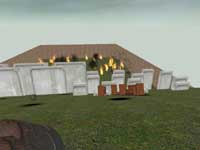 I didn't know the Source engine supported maps made on the Build engine.DM Assault
Author: Unknown. You mean people don't want to put their name on these abominations?
Fullbright?: Does the pope shit in the woods?
Spelling Errors in Text File?: No text file.
Pain Level: Remembering when Alf was cancelled.
Overview: What do you get when you combine a hill, some shit that's sticking out of that hill, and some dressers? You get the shitfest that is DM Assault. I think this is supposed to be a team deathmatch map. I'm not sure. I imagine the author wanted one team to hold the hill, and the other to charge up the hill to capture it. The team on defense can push little buttons and dressers will appear and roll down the hill. This would all be well and good if the map didn't look like something out of Duke Nukem 3D. This map is like a time machine back to 1995 and everybody is kicking ass and chewing bubblegum. And I'm all out of cum. Er, gum.