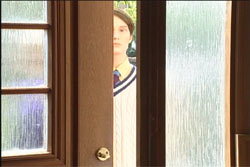 Bob is anything but normal.Mikey sends his mother into a panic when he returns home from school on his first day with the news that his teacher will be coming to visit. She is initially furious with Mikey until he explains that it's customary in Japan for teachers to introduce themselves to their student's family. Mikey's mom flies into action (without moving of course) and calls Mikey's dad to leave work and come home in preparation of the teacher's visit. They make plans to visit a hairdresser and beautician before Mikey pipes up that the teacher won't be coming until next week. Mikey realizes aloud that when you panic your family falls apart, and a crazed laugh is had by all!

Mikey and his family wait anxiously for the arrival of his teacher, wondering what the man might be like. Before this anxiety can build too much the doorbell rings and the elder Fuccons get their first glimpse of the mysterious and shy Bob. He whispers to them through the partially open door while they stare at him confusedly. The door is flung open (it actually moves) to reveal a woman in a handsome purple outfit who introduces Bob as her son and repeats his inaudible whispers. The woman, in turn, introduces herself as Mikey's teacher's mother. "Please call me Bob-mama," she instructs them.

Mikey's family seems a little confused by the situation, which is natural, since it is extremely fucking insane. They should be a little more tolerant though, considering they and everyone they know are talking mannequins the likes of which we haven't seen since at least "Mannequin: On The Move". They inquire politely about how Mikey is doing at school and through the conduit of his mother, Bob explains that he is adjusting quite well. The conversation last all of about a minute before Bob takes his leave and closes the door on his way out. Mikey and his family take this opportunity to stare at the closed door and laugh like hyenas. 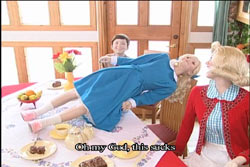 Laura is an unhappy child.Mikey is told by his mother that his cousin Laura has come from America to visit them. He is introduced to Laura and told to play in his room with her. Laura proceeds to insult Mikey's toys by calling them crap, flop down on his bed in a manner that only an immobile mannequin can, and moan that "this sucks" and she should "go back to America". Mikey's good-natured attempts to get her to play a game are met with more derision. When Mikey refuses to go along with her suggestion that they head out to a café the scene ends.

It resumes at the dinner table with the Fuccons and Laura enjoying pieces of chocolate cake that look like they are made entirely out of frosting. Laura initially impresses Mikey's mom by stating that she likes the cake and chiding Mikey not to waste his piece. She changes her tune quickly though and declares the cake to be "gross". This angers Mikey's mom which, in turn, prompts Laura to throw herself on the table and declare "Oh my God, this sucks". When Mr. Fuccon arrives home from work to find a girl in a blue dress lying on top of his dinner table he is introduced to Laura. She continues to be a hilariously insolent bitch and Mikey's exasperated mom instructs the poor kid to take Laura outside to play.

They go to the playground outside and Laura is at first reluctant to enjoy the festivities, placing her solid gold "this sucks" rubberstamp on swinging and going down the slide. Having her mannequin feet tied to the seesaw with blatantly obvious rope changes her tune however and before you know it both she and Mikey are laughing and playing together. She agrees to be Mikey's friend "until [she] grows tired of it", which prompts an argument between them as well as the vignette-ending insane cackling from Mickey's parents. 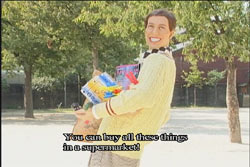 Mikey's dad keeps an eye on him while he's out shopping.This action packed sketch features Mikey heading out on the town in search of a list of items given to him by his mother. When Mikey initially agrees to go shopping for his parents they quickly rattle off an enormous list of items including a cucumber, clothes pins, some fish, and a magazine among others. Mikey leaves the house and is clandestinely followed by his dad, who wants to keep tabs on him and make sure he doesn't get into too much trouble. Mikey finds a vegetable stand and buys the cucumber, but he can't remember anything else so he goes all the way back home to ask his mom for the rest of the list. I should probably mention that about half of the time it shows Mikey with the cucumber he has it balanced on top of his head, possibly because the director couldn't get the cucumber to balance correctly on top of his hand.

Mikey's mom gives Mikey the entire list including what Mikey calls "clothes pigs" and sends him packing again. Unfortunately, Mikey can't figure out where to go to buy the items on the list. The tobacco store doesn't have any of them, and neither does the public bath house, so Mikey goes to Kyoto in search of the items. When he still can't find them he calls home to ask for advice. By this point his father has grown irritated with Mikey's antics and he rushes forward (without moving, sort of like folding space in "Dune") to explain that Mikey could get every single item from a supermarket. Mikey then turns the tables on his father and tells him that he knew he was being followed the entire time and just decided to have a vacation! Mad laughter abounds as the duo look into the camera. 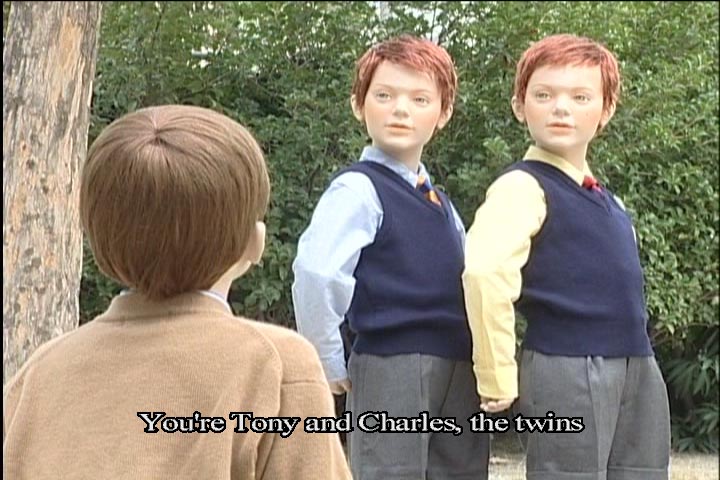 Mikey has a lot of difficulty finding good friends.Mikey makes a big mountain in the sandbox and wants to show it off. Just his luck, a couple of identical boys who stand one inch apart and finish each others sentences appear at the edge of the playground's sandbox. These two boys are Tony and Charles from England and they demonstrate an ability to finish each other's sentences and then get into bizarre contradiction-filled arguments. When Mikey shows them his sand mountain they smash it to pieces. When he asks them to play on the playground with him they explain that the only thing they enjoy on the playground is a metal bar which they lean their necks on. I don't know why they like the metal bar, but the image of the identical mannequins balancing their necks on it is pretty amusing. Shortly after declaring their infatuation with the bar, Tony and Charles flee the scene of the crime.

The next day Tony and Charles return to find that Mikey has built an impressive dome in the sandbox. They get into a heated debate about the quality of the metal bar before Mikey interrupts them and stops their argument. They head over to check out his dome, a laugh is shared by all, and then they smash his dome by standing on it.

I have detailed approximately half of the vignettes in this first of three DVDs on "OH! Mikey". The hilarity of the show is difficult to convey with the written word, but I hope my summaries coupled with the haunting images from the show will offer you at least some insight into "OH! Mikey". If you would like for me to continue to detail the adventures of Mikey, like how his parents fake a hostage situation to get him to drink milk or how Mikey finds out about his dad's glory-hole habit, just drop me an e-mail. If I get a good enough response I will at least finish out this DVD.

In the meantime you can check out the Region-2 DVDs from Jlist. I normally would not recommend a product from Japan under any circumstances, but "OH! Mikey" is surreal and hilarious in a way that few things are. It's proof that not everything that comes from there has to be either rape-filled or sickeningly cute.