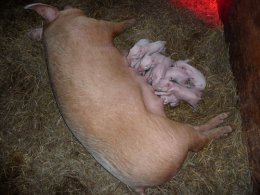 HELLO!!!!!!!! You probably read in the paper that the mayor's prized pig has had a brand new litter and hired yours truly to raise them and feed them. He had put a big ad in the paper asking for a local resident with pig experience to come forth and sleep in a guest house near the barn to tend to the babies and raise them to be 7 more prized pigs. You may or may not know I was on the radio show PigPulse for a long time so I'm more than qualified, and every episode was nominated for a Randy's Farm Radio Award except for the one where a caller got mad at me and yelled at me for over 40 minutes and I couldn't shut it off because I didn't know what button stopped the call or the radio show. I cried and cried and tried to play the radio show comical pig sound effects to hide my bawling. I cried so hard that i fell asleep for about 3 hours while we were still on the air and woke up and unplugged the radio stuff and drove home. Anyway this new job... What An Honor..... I am technically an employee of the city now which means i get benefits to sit and watch the city pigs. The mayor comes around to check on me a couple times a week and i say "Well They're Gettin Big. That One Over There Is A Real Champ, As Well As A Shyster. Ha Ha" and sometimes i do some oinks which get the pigs going wild. Let me introduce you to the pigclan:

MOMMA PIG: Victoria
Wow she's so big and prized and the babe that started it all. She has been in the mayor's family for over 8 years and has won the hearts and minds and county fairs of this area since as long as anyone can remember. Her belly is the perfect big belly. The only problem is she gets real cranky if humans come near and sometimes in the dead of night she oinks and it sounds like someone trying to sing which makes me scream in my bed

BABY PIG 1: Mikey
This was the first baby pig and is the biggest he is so energetic and happy but the name Mikey is bad according to me so I gave him the secret name of "Crombo"

BABY PIG 2: Cindy
SECRET NAME: Battery Eater
Battery Eater is a real wildcard around the pen she has the gusto to make it real big in the pig world. The only problem is one time she ate a battery when i was trying to fix a flashlight and i had to chase her and wait for it to come out and by the time it came out all the battery power was gone. I had to conceal the gross battery from the mayor as well by burying it. Not my best pig memory

BABY PIG 5: Stanley
SECRET NAME: Spider
He keeps crawling up on stuff and then falling from the rafters and scaring the heck out of me like a spider might

BABY PIG 7: Lil' Sugar
SECRET NAME: Pig That Fits In My Mouth
the runt of the pack but she's still very lively. also she fits entirely in my mouth we both like it