Sunday, May 14, 2000 by Rich "Lowtax" Kyanka
The staff behind Something Awful took a trip down to the giant mega-computer gaming conference, known to us mortals as "E3". This convention in Los Angeles celebrates the hottest and most exciting console and PC games to hit the market in the upcoming year. It's a conference that promotes sex, violence, money, and all the glitz and glamour of an airplane crashing into a Las Vegas stripshow. The Hair Giant, Ochnop, and I sauntered in, not knowing what to expect from this trade show. Now that the conference is over and our E3 wrapup has been posted, I'm still not exactly sure what it was all about. 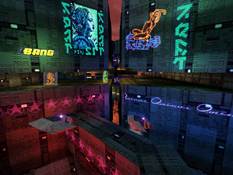 This is a screenshot of the game we weren't shown. Maybe that ended up being a good thing.

The Hair Giant and I arrived at the E3 Convention Hall around 11:30 am, at just the right time to attend our appointment with VR-1, the people who are producing such titles as "Nomads of Klanth", "The S.A.R.A.C. Project", "Rumble in the Void", and many other quality games nobody's ever heard of and will probably never ever play. We were there to see their only interesting title, "Hired Guns", which is some kind of "cyber digital Information Superhighway virtual spy deathmatch in matrix space" game or something. The Hair Giant describes the game as "like Unreal, only it's not done." Since every screen is lathered with red, green, and blue lights, it of course uses the Unreal Engine, which has a clause in its contract demanding the developer attempt to make every map look like Cranky Steve material.

We arrived there and met with the PR person, a tall man named Matt Springler, who informed us that he had "good news and bad news." The bad news was that their show computer, which had the "Hired Guns" demo and all their PR stuff, was accidentally shipped to Australia (I'm not kidding). The good news was that we didn't have to see the "Hired Guns" demo or any of their PR stuff. Actually, the second part wasn't true, but I can't remember what the good news was. I took the opportunity to ask him a few quick questions about "Hired Guns", since all their PR stuff was in the process of being carried away by marauding dingos or wallabees or chazwuzzlers, or whatever goofy animals live over there.

ME: "So, does your game have any dinosaurs?"

Matt Springler: "I don't think so."

HAIR GIANT: "What about invisible dumptrucks?"

ME: "Are you sure? Sometimes you can't tell."

ME: "You know, because they're invisible and all."

We made an appointment to meet with him again around 4:00 but we never showed up due to the fear that he might actually have a computer with the game installed by that time. Some businessmen in suits and ties then walked into the room, and the PR guy promptly ditched us to talk to them. So our meeting with VR1 was a bust, but since we didn't really plan on it being anything to the contrary, that was no big loss. This was the first in a series of busts that would define E3 for us this year, a continual string of failures that eventually led up to a point where The Hair Giant tried to asphyxiate me via Lucasarts promo stickers.