Reading Time: 'Frankenstein, Jr.: The Menace of the Heartless Monster'

Instructors, something about this Reading Task confused me in a saddening way. Please allow me to ask a question about something I have heard. An older boy told me Frankenstein is made out of dead people who were nice when they were alive. Frankenstein is kind to children and enjoys flowers. But everyone hates him because he is ugly and big, and because they wonder if his arms and legs belong to their dead parents. Frankenstein is not in this book, like I thought he would be when I saw the title. Is he dead? I would think that a Frankenstein, Jr. would have to be made out of his old parts, which are like twice-dead human parts. This one looks like a robot. Can corpse people have robot babies? Am I a robot, because I don't look like my Hulk dad? Will people hate me like Frankenstein when I go Outside? I have fears and concern.

Stevie, thank you for coming to us with what you have heard. We implore you not to waste worries on idle talk. Trust that if there's anything worth knowing or fearing, we will communicate it to you in the form of Reading Tasks or other educational or corrective techniques. Frankenstein did, or does still, exist, but his story is not appropriate and encouraging for someone at your current level of progress. He was not a Hero, and whatever reception he might or might not have received will not be relevant to your experience Outside. Also, everyone comes from a parent, even robots. Inform us at once if you ever hear anyone suggesting otherwise. You will learn more about your parentage, and parentage in general, on Revelation Day. Kindly tell us the name of the older boy who counseled you, after this presentation. For now, please proceed. 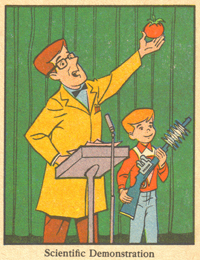 This is a Science Fair. At the Facility, the Science Fairs are only for Instructors, and they take place in Closed Rooms, and the noises they make are strange and secret. Maybe on the Outside things are opposite. The boy made a special gun that shoots lasers and also radiation. The man only grew a tomato. He is explaining that it is a fruit and not a vegetable. 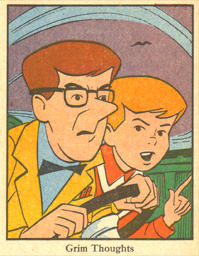 The boy is telling his dad that his project wasn't very good, and that he has a terrible shame about his dad competing against children in a Science Fair and doing so poorly. The dad just wanted to be in a Science Fair, because he didn't get to when he was young, because his own dad wasn't around to make him smart. The dad is very angry at his past, and also his future because his son stresses him and makes his face pointy. He is having Grim Thoughts about shooting his boy, with the setting on "laser" instead of "hero-making radiation." 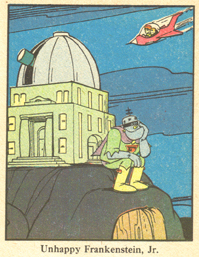 Frankenstein Jr. is unhappy because he's thinking about his dead dad, and also the dead people that went into making his dad. He doesn't look sad, because the people who hated his father changed his robot mouth into an always smile. It can be so scary Outside for robots, because people don't care about their feelings. 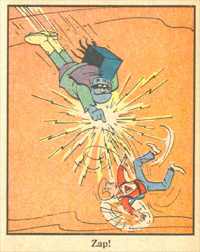 Frankenstein, Jr. has ways to cheer himself. He does a "Zap!" to the boy with a lightning shock. The Zap! makes the boy feel electricity inside, so he can see what it's like to be a robot, only it hurts him more because he doesn't have the right wires. 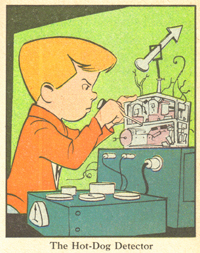 The boy did not like being zapped. He invents things when he's angry, and he's angry all the time, because his dad makes him embarrassed by talking about tomatoes and stuff when he has friends over to play. I don't know if Hulk Dad knows tomatoes are fruits, but I think he likes vegetables better. I think he would smash the tomatoes if he found out, but it would make a big red mess, and people might get a blood idea and hassle him and make him leave after I'd finally found him and loved him. I will never tell him the truth about tomatoes. 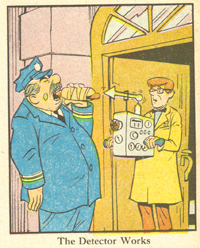 The dad wanted to test the Hot-Dog Detector, but he is doing it dumb way, like he always does with science things. He walked around until he found someone who was eating a hot dog, then pointed the Detector at him. The worst is that it is a Police Man, and they hate to have machines pointed at them, and plus this Police Man is very serious feeling about hot-dog eating. He closes his eyes and feels a love for the food, like it is a wife for him that will assemble itself out of the bitten pieces inside his stomach.