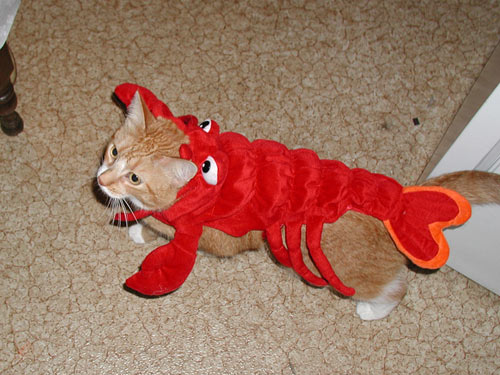 Oh No! Another draw your pets thread - Once in awhile a PI regular offers to draw everyone's pets. The results are usually cute until the artist gets incredibly overwhelmed and quits. This time GobbledeGook takes up her pencil to show us her skillz.

Backyard Breeder Websites! - Think you're a web designer? Visit some of the links in this thread to see the gold standard of web design you can only hope to live up to!

Pet Island Halloween Parade of Cuteness! [56k awww] - That's right! Halloween is just around the corner, so it's time for PI pets to put on their little costumes and beg the neighbors for treats!

Knitted Cat Toys in a Fish Shape! - Support a poor vet student: buy a fish toy! (I don't have any money, ssspy007, so I gave you a free ad in my update instead!)

Metalocalypse: Gentlemen, Dethklok... is back. - Metalocalypse is like This Is Spinal Tap only it has emoticons:

Pushing Daisies - Start Living Life, Wednesdays @ 8pm on ABC! - This show actually seems to be doing well in the ratings, which in retrospect makes all the people whining "IT'S A GOOD SHOW THEREFORE IT WILL BE CANCELLED SOON; FUCK YOU NETWORKS" on page 1 look a little bit silly.

24 - Day 7 Spoiler Thread - A trailer for Season 7 of 24 was released online. SPOILER ALERT: Jack awakens to find Tony Almeida and David Palmer taking a shower together, the previous two seasons having all been a crazy heroin-induced dream.