I know that thrilling description makes it seem like this game couldn’t possibly be bad, but take my word as someone who often refers to himself as a professional: it is. The sluggish, unapologetically brown overhead mode that you start out in would be a SA-worthy game all by itself, unless you happen to really enjoy watching badly-animated plastic soldiers throw brightly-colored nerf bullets at each other from a camera planted on top of Mount Everest. Once you get used to the art team’s unique “QUICK, MAKE EVERYTHING REALLY REALLY TINY!!” approach to graphic design, you will become amazed at the sheer amount of ugliness the art team was able to pack into characters comprised of three or four pixels each. Your team consists of several identical, freaky little inbred clone soldiers who shuffle around stiffly without ever moving their arms. All of them wear the same hideous shade of brown, and your job is simply to lead your noble Turd Squad all the way to where the wounded soldiers are, which usually happens to be a nice quick 15-second waddle away. 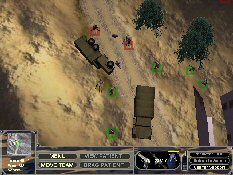 An extremely rare glimpse of the enemy soldiers actually moving.On your way over, don’t be surprised if you happen to run into an enemy soldier, which will be conveniently marked with a red square. “But Taylor “Psychosis” Bell,” you might say, “I do not need fancy-pants squares and bright colors to determine who the enemy is!” And as tempted as I am to agree and make fun of the programmers for including such a dumb feature in their game, I’d have to say those little red squares truly are lifesavers in the field, because the enemy soldiers are often completely indistinguishable from your teammates. You’d think an enemy soldier would easily be identified by a strong tendency to point his gun at you and repeatedly pull the trigger, but these enemies prefer to spend their time standing around motionless and sticking their heads into trucks and other solid objects. The only time they ever have a chance of killing you is when you’re actually treating a patient, but it’s easy to kill them beforehand if you happen to be a bad enough dude to walk within 2 miles of an enemy and click on him.

On a side note, you don’t only treat friendly injured soldiers in Combat Medic – sometimes the game makes you treat enemy soldiers instead. I suppose the idea is to keep them alive so you can question them later, but it still seems like a huge waste of medical resources. Fuck morphine and bandages, I’d rather administer a few elbow drops and then see if the guy feels like talking and telling me something more valuable than “AHHHHHH OWWW OHMYGOD I’M GONNA DIE!” Why don't you tell me something I don’t already know, unless you want one from the TOP ROPE! OOH YEAH!

Once you reach a patient, the game leaves the crappy Overhead Mode and switches to the significantly crappier Patient Mode, which allows you to both witness and experience some horrible pain. You get dumped into a closeup view of a blocky soldier who rolls around and repeats the same four speech samples over and over again, while bullet and explosion sound effects go off in the background every two seconds. The patient is randomly assigned an injury, which usually manifests itself as a red splotch appearing on some random part of his body, or perhaps a fluffy green tube growing on the outside of his pants.

The theory here is that you’re supposed to click on one of the tools in your medic bag, click on the body part you want to use that tool on, then repeat until the patient is cured and returns to combat to go get injured again. Instead, you end up spending most of your time wrestling with your mouse and trying in vain to drag the cursor around, since it hates to move for any reason and pays very little attention to the mouse input it receives. If you have the patience to overcome that, you’ll quickly discover Game-crippling Problem #2: the game refuses to ever recognize that you clicked on a body part. If you want Combat Medic to recognize that you clicked on the guy’s head, you must locate the magical Clickable Wonder Pixel hidden in a mystical cave deep within his right eyeball; anywhere else on his entire head and the game won’t even recognize that you’re trying to click on it. This basically reduced me to spending the entire time frantically clicking on an arm or a leg, desperately hoping to find the magical square that would actually make the game do something - a condition known as Myst Syndrome that can only be cured by the immediate installation of a better game. 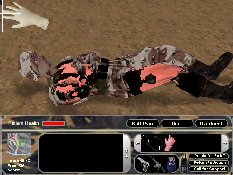 Dear Diary: a noisy pink blotch monster is screaming at me while I write in you.Your pal, Taylor.Eventually I figured out where all the tiny invisible hotspots were, but by that time I thoroughly hated this game and had already resolved to use my powers to hurt as many people as possible. This raised some thorny ethical issues that will be debated for years to come. For example, the first time I encountered a patient with bullet wounds to the chest, I cut all his clothes off with a pair of scissors and ordered him to return to combat. It may not have made me feel any better about myself, but it made him feel a whole lot worse, so in the grand scheme of things I came out ahead. I think most philosophers would back me up on this.

The incredibly boring cycle continues until you’ve treated all the patients, at which point you advance to the next level if you’ve gotten more than half of the possible points. That cycle of cycles continues for ten full levels, which I haven’t described in detail due to the fact that they’re all just about identical. The only difference is that instead of being dominated by brown, some of the later levels are dominated by a slightly less ugly shade of green.

As I leave this horrible, horrible game behind, I should at least be grateful to Legacy Interactive for providing me with a treasure trove of valuable information at the game’s official website. There isn’t any useful information on the website itself, but the site’s design speaks volumes about the tortured minds behind this ugly, sloppy abomination. The fact that it prompts you for a valid e-mail address in order to simply enter the site shows that either they’re really desperate to get in contact with someone who actually purchased their game, or they’re selling e-mail addresses to spammers to supplement the dozens of dollars they make annually by selling to confused grandparents looking for a cheap birthday present. The other indicator of a possible mental problem is the super-secret site password that came with the game: BOHICA. This well-known medical abbreviation, short for “Bag of hell I consume. Ass!” indicates an unhealthy obsession with Jeff K and a tendency to inappropriately use the word “ass” in medical abbreviations.

At the end of the day, I have to admit Combat Medic did teach me some valuable lessons about the medical industry, lessons that can only be learned through bitter experience. For example, I learned that no matter how many bandages you bring along on a mission, you’ll never quite have enough to transform your patient into a mummy. I learned how many scalpel stabs it takes to kill a man (four) and how many it takes before he starts whining (one). I learned that stuffing a laryngoscope in someone’s mouth for no reason will get him angry and cause him to lecture you about your responsibility to the injured or something, but I also learned that a laryngoscope is a very effective lecture-muffling device. I learned that the “survival saw” should rarely, if ever, be used to decapitate a patient. And after suffering through several educational hours of Combat Medic, I have now returned from the front lines to give the Legacy Interactive team this message: the next time you hear a quiet nagging voice saying “is this really such a good idea for a game?” please listen to it. You could save everyone a whole lot of unnecessary suffering.