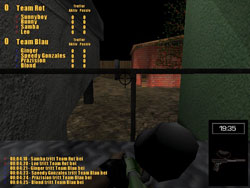 The graphics astound!I often lie in bed at night wondering why more mundane things can't be combined with bad softcore pornography. I would like to see oiled strippers working on PC case mods or a moaning Shannon Tweed doing taxes at H&R Block. Until someone realizes my fantasies, at least I've got "Gotcha Babes X-treme" to fulfill my need by combining the intense sport of paintball with the unsatisfying titillation of topless unattractive women prancing around stairwells. Well, it might if it weren't one of the worst professionally produced games I have ever played.

The geniuses behind Gotcha Babes X-treme have tried to sex-up their horrible paintball game by having the crude player models be topless blond women. I've played paintball before and women running around with no shirt or bra on is asking for a blister scarred torso. Not to mention you would be amazed what a horrible shot-trap the underside of a woman's breast is. There are two player models, by the way, so expect to get "turned on" by the same woman a lot. The low polygon count of these topless player models will have you looking at the comically crude sex modules for Neverwinter Nights in a whole new light. 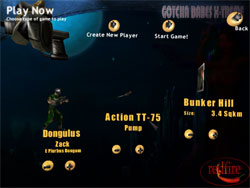 Cry havoc and let slip the dongs of war.There are a total of five play types, ranging from "arcade" to "assassin", and all of them are practically identical. For example, the difference between "assassin" and "capture the flag" is that in assassin one team's flag is replaced with a PRESIDENT (just another sharp-titted blond) who you can "assassinate". There are a grand total of three sound effects in the game; footsteps, gun firing/hitting, and a loud annoying voice that shouts "hit out!" whenever a person is shot. There is one musical track, played when the game starts, played at the menu, played in game, and played during the "erotic videos". And no, the music is not good.

The computer players are completely incompetent and usually spend the first minute or so of a match desperately battling with the extremely basic terrain trying to move forward. Frequently they will lose this battle and end up running into the first wall that crosses their path until they are shot by you or a luckier AI player. I don't totally blame the AI on this one either since the levels are inevitably full of impassable terrain features that you can't see. People who bitched about taking damage running off a curb in "Grand Theft Auto" need to spend five minutes trying to walk up a one inch high step in Gotcha Babes to put things in perspective. Chances are they'll get stuck on a tree like the crude AI players and go running back to their PS2 begging for forgiveness.

Combat in the game consists of charging to within 20 feet of an enemy and then firing until you hear "hit out!" repeatedly. Any attempt at long range shooting is pointless - you won't hit - and it's so easy to run up to the AI that you might as well haul ass at top speed toward their base. Terrain is almost useless for cover, although it's interesting to note that the nearly invisible bush sprites work best because they have enormous hit boxes that shield you completely. 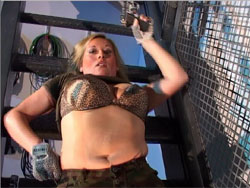 Military training is not as rigorously physical as it once was.The only time you're really in danger of being shot is when the AI runs into a corner as a group and turns into an immobile death-dealing polygonal hydra. You'll round a corner and there will be a ten armed beast with a jumble of letters above its head that kills you instantly. This actually happens more often than you would expect and you never know what crazy corner the team collective will be lurking in. Incidentally, if the real president of the United States ever finds himself pursued by assassins the best advice I can offer is to run to a corner with a half dozen Secret Service agents and allow them to merge into his body.

The real treat of Gotcha Babes X-treme is that when you win a match in any mode other than "arcade" you will get to view an "erotic video". Even these fail miserably. The videos are of such aggressively low encoding quality that it's as if the editor responsible had a goal to include the most obvious interlacing lines possible. It doesn't help matters that the videos are displayed full screen even though the original file (which sits on the CD as an AVI in the data folder) was much smaller. This means that the videos achieve the impressive double K.O. of being both really blurry and really jagged.

Not that you'd really want to see the videos anyway. There are a total of five of them, featuring three different girls. One woman looks like she's been depression binging on ice cream and has enormous breasts that flop over her bra and sag to her puffy stomach. Chunky gets two videos all to herself; one to showcase her droopy mom's tits and a second to wriggle her thong-clad ass for the camera. Another woman looks like a gangly teenage boy with some sort of wasting disease and a chromosomal learning disability. The third woman is attractive in a "put enough makeup on a horse and it'll look good" sort of way. She's got the body for porn and the face for a Soviet-era propaganda film about the strength of the proletariat in industry. 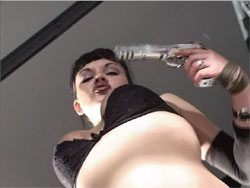 Camo paint by Revlon.The vague lesbian scene that accounts for the final piece involves the slightly good looking woman and the emaciated Dachau escapee rubbing and touching each other. These scenes have the same sort of disconcertingly coached feeling you get from watching trained animals perform on film. You know there's a guy just out frame telling them to rub each other while he holds Livah Snaps up tantalizingly, inspiring them to overcome their animal flight instinct long enough to briefly press their stomachs together. Though there is full nudity in these sequences the thoughtful filmmakers go to great lengths to conceal the women's genitals. "Yes, please walk down the stairs sideways human toothpick, we can't let the children see your block-like vagina."

If the videos and incredible paintball action haven't left you with your fill of Gotcha Babes X-treme you can spend almost three seconds browsing the "tactics" section of the game. This allows you to view the stats of the various paintball guns and size up your two identical opponents repeated twenty times with comical names. Oh Speedy Gonzalez has a higher speed! She will be a real threat to me on Ghettoville when she gets stuck running into that ten polygon shipping container.

One last shout out has to be given to the hilariously inept Hilltop Village map. For some reason the map takes place in a circular arena with a huge pedestal in the middle. This column is apparently the developer's idea of a hill and it includes ramps that curve up the sides so that you can do battle in the village at the top. The thing is, the computer opponents are either incapable or unwilling to go up the ramps. In the rare event that they don't get snared on the starting bunker they'll either scamper past the column or make it maybe six inches up the ramp before becoming entangled on the handrail. With no multiplayer option this means the hilltop village serves as a big obstruction that you avoid on your way to the enemy base.

Sex and videogames have been anything but a happy couple for much the same reason that sex and cartoons have walked a rocky road. Video games are generally regarded as juvenile and something like Gotcha Babes X-treme is not going to shake up anyone's preconceptions. Even good games like "Mafia" that include sex as part of their story end up embarrassing the gamer with crude simulacra and wooden animation. Attempts at focused eroticism in video games usually meet with more approval when they draw on slightly more established media like illustrations (hentai) or video (American DVD sex simulators). Unfortunately, sex in video games still resides in the uncomfortable ground where it is either somewhat dubious masturbatory material or a joke. Serious efforts to incorporate sex into the mainstream usually results in painful misfires like the aforementioned Mafia sequence.

If you want to read about why a Poser model is scary and Sailor Moon makes people pop boners you should read up on Dr. Masahiro Mori's "Uncanny Valley" robotics hypothesis. It sounds dull, but it's actually pretty fascinating. It goes a long way towards explaining why the generally Western aims of realism in gaming can make sex and other things a terrifying component while sex in more stylized and less realistic worlds can still be unthreatening and arousing. I don't actually think Dr. Masahiro Mori is entirely correct, but it's still interesting stuff. Although I am looking forward to playing Redfire's Chicken Poppen 2