I can’t stress enough what a horrible idea for a game this was. Legacy Interactive has literally dozens of employees, many of whom are of legal age to work in the United States, so you’d think at least one of them would have realized that while it is fun to shoot and destroy things, it’s not fun to be the guy stuck cleaning up the mess afterward. Instead of taking a look at the industry and noticing that other game companies have failed to make “Katamari Damacy: The Aftermath” or “Tribes 3: Chronicles of a Frisbee Retrieval Expert”, the poor souls in the Legacy Interactive sweatshop simply convinced themselves that gamers the world over would have a grand old time running around playing janitor, hours and hours after the events they should have made a game about had already transpired. 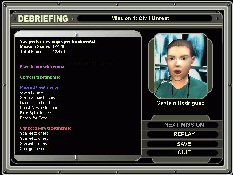 Note to aspiring combat medics: when your instincts tell you to hit a patient in the head with a sponge and then stab him with a scalpel until he dies, it's probably best to ignore them.Hell, they even managed to mislead the gaming public with the subtitle on the box: “Combat Medic: No man is left behind.” That makes the game sound like an epic tale of courage until you realize the entire purpose of the game is actually to go back and take care of soldiers who have already been left behind. I guess they figured that subtitle would sound a little more heroic than “Combat Medic: We left you behind! I don’t know what we were thinking when we did that! Ha ha! Oops!”

In between my experimenting with various fun ways to abuse my medical equipment, I managed to piece together a vivid sense of being a lost and lonely medic, adrift in a sea of pixelated, badly-textured mud and blocky strangers who like to babble incoherently and roll around on the ground gargling. Here is a brief summary of the combat medic experience, as seen through the widely-spaced eyes of a Legacy Interactive game designer.

Player chooses between three medics: Generic White Guy, Generic Black Guy and Generic Asian Guy. The only discernable difference is that Generic White Guy waddles around the map slightly slower than the other two.

Your chosen medic magically transforms into a grainy little toy soldier who appears in a giant smeary ocean of some mysterious brown substance which may, depending on what level you’re on, have patches of green or little grey blocks strewn across it.

Your medic is forced to bravely waddle his way across the map until he sees one of the wounded soldiers, who are helpfully marked with bright yellow squares. This is for the benefit of players who may not be familiar enough with medicine to figure out that the soldiers lying there motionless are probably in more urgent need of medical attention than the soldiers running around shouting. 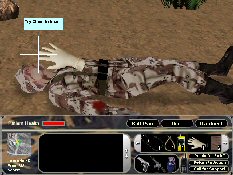 This patient appears to be suffering from a critically low polygon count and a bad case of See-through Hat.

Game switches to Patient View mode, at which point the patient either says “Huh? What’s going on?” or makes an unidentifiable noise halfway between a duck and a kazoo.

You attempt to diagnose and treat the patient’s injuries, only to be thwarted time after time by the terrible graphics and interface.

Frustration quickly turns to hatred of this game and all the patients in it, and all semblance of medical ethics goes right out the window.

Patient says “Are you sure you know what you’re doing?” or “OH GOD AAAAAAAAAAABLARGARgbthpgurgle” depending on which part of his body you are currently prodding and/or stabbing.

Game warns you “Patient is going to die.”