After 30 minutes of reading various FAQs and common problems people have had with a process with traditionally involves minimal user interactivity, I finally got the sucker on my computer. With all the luck I was having so far, I was afraid that my computer would start throwing out error messages like this at any moment:

I booted up to the menu screen, and everything looked pretty good: the word "Daikatana" was printed up top, so I wouldn't get confused and think I was actually playing a good game. This was very nice of ION Storm, and I can only hope more games in the future choose to do such a revolutionary thing. I configured my character and jumped into the single player fun! 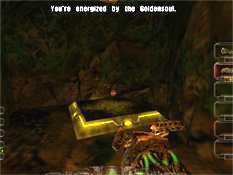 The game tells me I was "energized by the Goldensoul", but I'm not really turned on by watersports, thanks ION Storm.

Oh, what fun it was! After reading a particularly poorly written introduction that said something about me hiding in caskets and falling out of a truck, I found myself trapped on "Doctor Goofy's Wacky Bug Island". Hoards of ferocious, man eating mosquitoes and frogs seemed to gravitate in my general direction with the sole intent to annoy me to death. The evil cyber frogs, which not only had the benefit of disappearing underneath the cover of fog, also seemed to be able to multiply off screen until it got to the point where every time I turned a corner, 500 more frogs had spawned and were doing a pseudo-"Zergling rush" on me. This added a real exciting element to the game, as I had to hurry up and remember what the quick key was for "quit game" before I was mauled by the 154th Killer Frog Platoon. After seeing the cool, serene Windows default background, I was reminded that I had to start the game again and keep playing so I could review it. Sometimes I hate this job.

Anyway, in addition to the evil frogs, there's also evil mosquitoes and evil crocodiles. As far as I can tell, this island used to be a particularly lame zoo until Doctor Goofy came by, sprayed a few thousand gallons of green paint all over the place, and added some "hi tech" things like a door and some pipes. Romero, apparently wanting to revisit the "good ol" days of "Doom", shrewdly elected to skip programming AI and go for the "hundreds of enemies" approach instead. I believe that this is a good idea, particularly if you're fond of shitty games or you personally hate yourself.

So I continue to run around, shooting various wildlife and eating plants to heal up. Did I mention that health comes in the form of Nali Healing Fruit? Yup, you have to grab some red fruit in order to increase your health.

Once you pick up some random powerups that are laying in strategically located places like a hole, behind a door, and in the middle of a puddle, you proceed to the next part of the map, which is denoted by having the game stop and start loading (ala "Half Life"). The only difference that separates this from Half Life (beside the fact that "Half Life" kicked ass, whereas this game merely licked ass) is that the loading times in "Daikatana" take about 10 times as long as "Half Life" did. Why the hell does it take so long? I couldn't figure it out until I looked at the game's log file:

and so on and so on. At least that explains the long load times.

The next part of the map was basically like the previous, except you have to solve a complex puzzle which involves jumping straight up and shooting a switch. Then you get to fight some frogs, a few more frogs, and roughly 600 billion mosquitoes. I met some idiot NPCs who were working in a large, technological outhouse, so I brought a swarm of killer insects towards them. The bugs kept attacking me while the NPCs just cowered, so I killed them all and proceeded to the next level.

Yup, the game crashed when I was going from one part of the map to the next. It came up with this wonderful error:

So I rebooted and ran it again. This time the game wouldn't even start at all, crashing with the same error when I attempted to load my saved game. "That's okay," I said to myself. "I have two computers! I'll simply mark that one off as now having the 'Terrible Curse of Daikatana' and install it on the next one!" I was able to play the game on that one until the first map transition, at which point it crashed with the same lovely error. That was the final flaw that broke the camel's back. Seven fatal error messages that broke the game within the first 50 minutes of playing time. Now neither game runs at all, and for some odd reason, I'm not bothered in the least (and I'm not even hopped up on painkillers yet!).