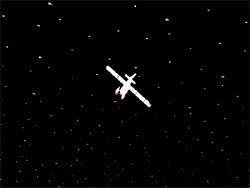 Textures such as the sky and cloud textures (not pictured) frequently fail to load. Upon launching the meat of Dangerous Vaults you will be treated to an overly long sequence of a red and white plane flying through the sky above a jungle. That's assuming that the textures loaded and more often than not the textures do not load, showing you an intro where a plane darts around a starry sky while an ocean occasionally populated with jungle tree sprites scrolls below. Eventually Tara decides to jump out of the plane and parachute for about half an hour down into the jungle.

Once she completes her descent into the jungle of sex you quickly realize that the ridiculously long jumps and agonizingly slow normal movement were unfortunately not restricted to the demo level. While it would make sense to use only the jumps to get around since they are so fast they are also almost impossible to control and the game can be very unforgiving about killing Tara with falling damage. Even more dangerous than causing Tara to fall to her death is causing Tara to leap through a wall and become trapped in one of the games many infinite clipping planes. This unique method of limiting the player's jumping ability quickly forces you to rely on Tara's walking to get her around levels, which is doubly horrible since she isn't just slow, she's slower than every single enemy in the game.

You'll notice that I mentioned enemies. That's because Tara is no innocent bystander to the rapes in Dangerous Vaults, she is the sole rape victim available to a wide variety of creatures that I will be nice about and refer to as "creatively textured". Based on the description of Dangerous Vaults on the Near Fatal web site you would think that Tara is really looking forward to being humped by animals, but the truth hurts, and so do animal rapes. While Mr. Monkey is pumping away at Tara's misshapen thighs he's also draining her health bar faster than drowning does in the game. 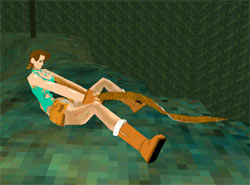 Snakes are some of the friendliest enemies in the game. Once you manage to not immediately die and make your way into the monkey-populated area of the game Tara will be pursued by the loping apes and their erect red penises. About the only high detail textures in this game are animal penises and testicles, with a particularly disturbing amount of attention paid to the grapefruit sized testicles of some of the creatures encountered in later levels. Tara is capable of doing something that is sort of like a really fast bow and also a weird kick type attack that sometimes makes stars shoot out. Neither of these does much of anything to the monkeys or any of the other various animals on the prowl so your best bet is to run away, although this would defeat the whole point of the game, which is seeing a monkey withdraw from a low-poly count vagina followed by a stream of white goo which is implied to be monkey ejaculate.

Not all of the animals on this first level are as injurious to Tara's health as the brutal monkeys. I managed to find a snake that was quite accommodating and did very little damaging, marking it as one of the friendliest enemies in the game.

I should probably mention that Tara's health is represented on screen in no less than three different ways. There is a simple red health bar, a weird sort of biorhythm readout that doesn't make much sense, and then her clothes will become increasingly torn to shreds the more damage she takes until at about half health she is completely naked. This sounds like an interesting concept until you realize that you'll lose half of your life bar the first time you jump. It's fairly comical to fall off of a cliff after jumping three city blocks and having Tara's clothes explode off of her lumpy body with a weird cracking sound. It gets much less funny when a monkey immediately throws her to the ground and pounds the life out of her.

Later levels of the game are also set in a jungle full of mysterious and invisible portals to an inescapable dimension of clipping but feature different animals to be raped by. The game is virtually impossible to navigate but thankfully Near Fatal has realized this and provided cheat codes to jump to all of the different levels. Let's take a look at some of the foes you will encounter in Tara's adventures through the Dangerous Vaults. 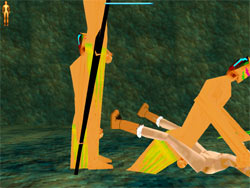 The natives have the ability to "phase" through solid objects including each other. Rape Apes - As I mentioned earlier these will probably be the first enemies that you encounter. They look sort of like a smile face sticker applied to a rolling lump of feces with weird repeating patterns on its surface and a red candle sticking out of the middle. When they assault Tara they will stretch their arms like a doppelganger of Inspector Gadget made out of mud and pin her to the ground on her back. They will then hump her for a gruelingly long amount of time before pulling out, only to repeat the process almost instantly unless you are very quick with the jump button.

Rape Snakes - The snakes are the only enemy I encountered that didn't really pursue Tara. When you walk up to one it will curl up Tara's leg before bending her backwards at the waist at an uncomfortable-looking angle and descending into her always-ready love cove. They inflict minimal damage.

Natives - Multiple levels of the game are populated by these guys. They look sort of like a child's drawing of a stereotypical headhunter only they are really narrow and about three times taller than Tara. They have highly detailed scabby-looking genitals and the second biggest testicles in the game. They like to rape in a manner very similar to the monkeys. Since they're so tall their entire lower bodies will clip through the ground plane during the rapes adding heavily to the otherworldly eroticism of Dangerous Vaults. Similarly, their native pals are prone to clumping up behind the hot action and merging into one bizarre mass of native faces and penises reminiscent of the movie "The Philadelphia Experiment." 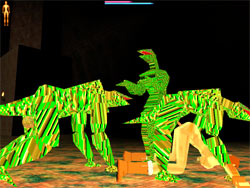 It's a lesson in love. Doggystyle Lizards - Later levels of the game are overrun with two species of lizards, the Doggystyle Lizards being quadrupeds and their larger cousins being bipedal. Their bodies are covered with a weird green and yellow pattern that looks like it was created in MS Paint by randomly clicking. They also have bizarre mouths that are completely one color of red and will sometimes turn into big red circles, which I guess mean they are howling or something even though there is not sound associated with the action. They enjoy bending Tara over and filling her womb with what appears to be water. They also enjoy clipping through the floor and making you think that there is a third species of reptiles that looks like an alligator. It's sort of like camouflage except that it's not like camouflage at all. Another dread tactic of these guys is to surround you and force you to try to jump, at which point you will hit Tara's head on the ceiling and get stuck on top of them. Since the advanced engine used in Dangerous Vaults is so, well, advanced you can't move once you're on top of a monster. You just stand there unable to walk, jump, or be raped.

Sexy Switches - As if all of the rape in the game weren't enough all of the switches are phallic shaped and must be mounted by Tara to activate. She slides on top of them or, presumably, backs into them and then sort of moves a little bit before getting up. It takes a really long time and I never managed to see what she did with the ones mounted on the walls because whenever I activated one the camera would clip through the walls into nothingness until she finished. She does squats on the ones on the ground, and Jesus she takes her fucking time with it.

I admit problems with the game's interface prevented me from actually completing any of the levels. However, I think I got a pretty good idea of what "Dangerous Vaults" is about from the two hours or so I spent trying to accomplish anything besides seeing close-ups of animal testicles. Despite this I have a nagging suspicion that I overlooked something, that there is some animal I have yet to see invade Tara's most private of areas. After playing this game I would like to say that my goal - my greatest hope - is to find and be raped by this final enemy. Instead I think my greatest hope is that someone will walk up behind me while I'm writing this and fire a 9mm pistol round into the back of my skull.