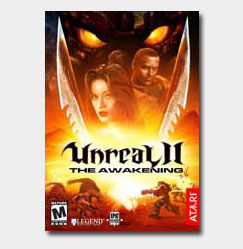 At a Glance: From the makers of the original colored-lighting festival "Unreal" we get the single-player sequel, creatively named "Unreal 2: Some Generic Filler Subtitle". Designed for dullards who like pretty lights by dullards who like pretty lights, Unreal 2 is the jewel-encrusted Faberge turd of first person shooters. It fails utterly on every level but the eye candy, so follow that rail of tears through the amazingly beautiful stages because blowing away uninspired aliens and having embarrassingly bad conversations about the most generic plot of all time never looked so fucking good. Next to the graphics, the best thing about Unreal 2 is that you can finish it in under about six hours, or at least get to the point at which it stops being tolerable and uninstall it. For Lowtax that was the first stage. I made it to the last stage before I heard the plastic of my mouse creaking beneath my rage-clenched hand and bid adieu to this steaming pile of garbage. 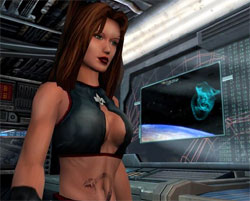 At some point in every gamer's life he or she has to begin to doubt the reviews they read in magazines and on web sites. For me I think it was when I was about twelve and I saw that Descent had somehow been rated as the number two greatest game of all time by PC Gamer. Then I turned the page in disbelief and was treated to a full page color ad of the polygonal fag boxes from Descent bursting from an explosion to herald the impending arrival of Descent 2 at a store near me. The nadir of reviewer integrity used to be Black and White, which was raved about by critics as wonderful, amazing, and many other adjectives that certainly don't apply to that piece of crap. Hopefully my copy is stuck to the bottom of a trashcan somewhere by old syrup and a filth-encrusted Kleenex.

Times are changing bucko, and Unreal 2 has stolen the crown of soulless reviewer hype from Black and White with resounding cries of "revolutionary!" and "the best first person shooter ever!" I have two magazines in my house that rated it a 9 (out of 10) or above, and online sources are only slightly less likely to heap undue praise on the game. How can these sons of bitches look themselves in the mirror in the morning without cringing from their ugly, pimply, nerdy liar's faces? How does it feel to rubberstamp a thumbs up on any game that bought full page four colors in this issue or is sponsoring your latest banner ad campaign? I say fuck them all and damn them with my non-existent powers of voodoo to an eternal pit of fire and high-school athletes who bullied them.

Unreal 2 is a rotten abortion of gaming. If you feel yourself getting mad at my scathing criticism then take your fucking eyes to some other web site where the reviewers will reassure you that you just spent those 50 bucks exceedingly well. I'm doing this as a warning to hopefully save a few people on the fence from wasting money and time on this piece of crap because a hundred Gamespot and IGN drones soiled their panties fighting an endless stream of spiders. Still not clear? I have played better Java applets than Unreal 2 and I only wish I were kidding. I think I've made my point, now let's dissect this cadaver and find out just how full of worms it really is. 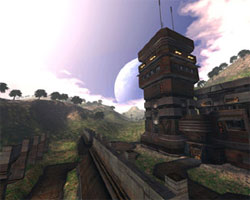 The environments are for the most part beautiful.

Let's get the good out of the way because I have a lot more ranting to subject you folks to. Unreal 2: You Won't Care About Anything That Happens In This Game looks like a million bucks. Actually it probably looks like about five or ten million dollars wasted on talented modelers and texture artists while the rest of the staff ate donuts and read through the design document for Halo, occasionally jotting notes in the margins about how to make Unreal 2 infinitely worse. I think it's fair to say that Unreal 2 is the most attractive First Person Shooter ever created. The environments, while limited, are often sumptuous and detailed, the models are crisp, and most of the textures are colorful. I ran the game completely maxed out on my new "totally boss" computer and it was a real treat to look at. Note that I used the term "totally boss" to let you know just how amazing my computer is.

The shortcomings in the graphics fall mostly into the category of "uninspired character design". Many of the people you talk to, while very detailed, are just sort of generic. Whoever thought it was a good idea to put the "greatest strategist of humanity" in a form-fitting leather belly shirt really needs to have lava funneled up their puckered asshole. The aliens are also prime offenders when it comes to poor design. The leaping monkey-like creatures you fight in endless waves are about as cool and menacing as Corey Haim delivering a line about "whooping your butt" in the movie "Gleaming the Cube." The Skaarj are passable, and everything else is a stupid set of "character concept art" copied from Jeff K.'s history notebook. Floating sacks of gas, evil mercenaries, and laser-equipped robo squids that look like a twelve-year old's description of the ships from "The Matrix" all have the worst AI this side of the barrels from Donkey Kong.

The worst are the spiders. Endless swarms of spiders in day-glow colors and a giant monster queen spider that is probably the shittiest looking boss I've seen in a FPS in a decade. Don't get me started on how flamboyantly stupid the concept of a giant spider queen and hundreds of spiders taking over a "space lab!!!" really is. Here's a hint: it makes the screenplay for "Alien: Resurrection" look like Dostoevsky.

Probably the most attractive level, or at least the most visually interesting, was the one where you descend into a massive planet-sized creature. Even this environment is somewhat ruined by the game design, which includes exploding barrels inside of the monster planet and lots of mercenary soldiers just sort of wandering around until they manage to kill themselves, just for the heck of it I guess. Other environments include a musty swamp that seems lifted almost directly from Halo but manages to be less immersive, and a H.R. Giger-esque alien world that is as staggeringly boring to play through as it is staggeringly huge and detailed. There are many other less notable environments like "rocky planets one through eight" and "another human base with fucked up monitors."

Probably the most well-designed, detailed, and attractive level is your "Space Marshall" ship where you and your intrepid crew walk around and talk about clichéd shit, spew forgettable one-liners, and endure completely worthless mission briefings. A smart game design company would have used this environment for an intense defensive mission where your ship is boarded and you and your crew must fight off an attack. Instead it serves merely as a backdrop for the sub-"Space: 1999" quality melodrama that plays out in the game. Even these interactive conversation segments restrict your freedom, usually forcing you to talk to everyone onboard about their own ridiculous nonsense problems and thoughts before you can once again launch into space and fight your way through a corridor of evil. Additionally, Rich "Lowtax" Kyanka ICQed and asked me to write something about how your ship seems to be several miles long yet you can only explore 20 feet of it because there are shiny crates blocking every major accessway, but I replied by shutting down ICQ.