At a Glance: Remember all of the psychotic game ideas people came up with during the 8-bit NES age? Companies routinely made games about bubble-blowing dinosaurs who turned their enemies into fruit or snakes that chased down and ate colored balls with little helicopter rotors in order to make their tails grow longer, but they were able to get away with it because the games turned out to be just about the most fun you could possibly have that didn’t involve making elderly people slip on banana peels and fall. Now Activision Value Publishing, the same geniuses who released Extreme Paintbrawl 4, have brought us two modern examples of the underrepresented “how many bottles of cough syrup would you have to drink before deciding to make a game out of this” genre. The only difference is that these game concepts are more stupid than wacky, and instead of being fun they make you want to cash in your life savings and go buy a whaling vessel so you can shoot yourself through the head with a harpoon. Preferably an exploding harpoon.

In case you’re wondering why I’m including both of these games in a single review, it’s because Activision Value decided to package both of them together in a single case, just so the cost of using two separate jewel cases didn’t cut into their nickel-per-unit profit margin. The case proudly declares that you will get to experience not only a game about making stupid little cheerleader routines, but also a game about raising horses and making them slowly walk around, all for the low, low price of “I can’t remember what the price is because I lost the receipt.” 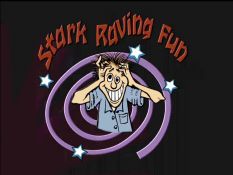 You know you're in for a great game when you see a logo like this.

Right from the get-go you can tell Championship Cheerleading is going to be a fantastic experience, since the whole game runs in a little 640x480 box in the center of the screen and there’s no way to change the resolution. And then there’s the screen where you can rebind your controls, which I thought was funny because there are only four keys to bind – up, down, left and right. Naturally they’re bound to the four arrow keys, but I guess you can switch it to a WASD setup if you’re a pedophile and you need your right hand free while you’re playing.

The first of the three TOTALLY EXCITING MODES you’ll get to experience (picture me sarcastically opening my eyes really wide when I say that) is the Create a Routine mode. To make a routine, you will have to go through the laborious process of:

Selecting from a list of “patterns”, which are critically important to the gameplay because they control the sequence in which the cheerleaders take steps in various directions and slowly wave their arms around.

Forming a sequence of words for the cheerleaders to say while they hop/stumble around and awkwardly flail their limbs around like they’re trying to swat imaginary fireflies. The task of making a sentence from these words is made more difficult by some of the strange choices the designers made when deciding what words to use. (“you” isn’t available, but “ho” is.)

Choose from one of several annoying tunes to accompany the routine. The routine never syncs up with the music or follows the beat in any way, so I suspect the music was only added to justify the cost of paying a sound engineer 8 Chuck E. Cheese tokens an hour, plus the cost of the bandwidth it took to download a free trial of FruityLoops. 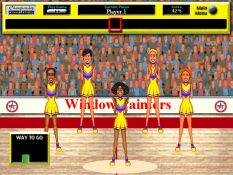 I hate this game so much.

In the second mode, “Practice Mode”, you get to listen to the obnoxious background music you selected earlier while the freakishly tall cheerleaders chant and go through the hand-waving and slightly-to-the-side-stepping motions you selected when you created your routine. And on a completely unrelated note, occasionally an arrow will slide in from the right side and you have to press the corresponding arrow when the scrolling arrow hits the center. It’s kind of like Dance Dance Revolution but without the hyperactive asian kids and giant fat men who play for five or six seconds before going directly into cardiac arrest. I say it’s an “unrelated” note because pressing the arrow keys doesn’t seem to be a requirement for making the cheerleaders do anything – they just go ahead and do their little routine regardless of whether or not you hit any of the arrows. However, missing an arrow carries the risk of having your performance rating downgraded from “Super!” to merely “Good”, and needless to say that is not a risk to be taken lightly.

The Competition mode is exactly like the Practice mode, only you do it three times in a row. And after each round, the game takes your score, makes up a bunch of other scores for other teams (with intimidating names like “Snooty Snakes” and “Peaches and Cream”) and shows you just how well your squad of Stretch Armstrongs measured up. And that’s pretty much the entire game. There is an added option where you can import your own MP3 to use with a cheer, but since the cheers don’t even sync up with the packaged songs I highly doubt they would sound at all good with an imported MP3. And as amusing as it would have been to make a cheerleading chant with a Hammerfall song in the background, there simply wasn’t enough time for that in my busy life. In order to get the most out of whatever I paid for this thing, I had to experience the second half of this wonderful value software package – Horse Illustrated Championship Season: The Ultimate Riding Adventure™!