At a Glance: I never got into superhero comics, since I spent most of my childhood years religiously playing Nintendo and most of my high school years downloading pictures to add to my massive collection of viking porn. But playing Hero X made me very glad about that, since apparently superheroes are jerks who spend all their time walking around town and randomly punching people just to see them flop on the ground while funny little sound effect bubbles pop up in their face so they can’t see anything. The Hero X developers were blatantly trying to ape Diablo 2 while adding a lighthearted superhero theme, but in doing so they managed to create the most excruciatingly painful blob of twitchy, repetitive mouse-clicking tedium since, uh, Diablo 2. 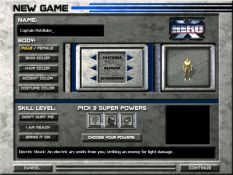 The pulse-pounding character creation screen. Try to contain your excitement. Go on, try, I dare you.

I’ve been writing for SA for seven months, so by now I am very aware that experiencing pain is a large part of this job. People routinely inflict pain on me by sending me very rude and hurtful messages accusing me of being biased when I compare the fun factor of their favorite game to swallowing a bucket of itching powder, and sometimes they even give their ferocious verbal attack an extra barb by brutally pointing out the appropriateness of the site’s name. One guy sent me a long, angry flame mail about my Dragonball Z: Budokai review and ended his message with “i bet you wouldnt be talking like this if goku really was saving the planet”, which hurt me very deeply by causing me to laugh until my lungs burst out of my chest and went flying across the room in opposite directions. Fortunately, all of those experiences have helped me develop an inhumanly high tolerance for pain, which not only helped immensely when playing Hero X, but will come in handy sometime in the future when Lowtax follows through on his threat to do unspeakably horrible things to me if I ever write another ROM pit review when I’m too sleep-deprived to get past level one.

The click-on-everything genre is spreading through the gaming industry like a splotch of diseased fungus, so Infogrames, proud publisher of both Unreal 2 and the game that I would never insult if Goku really was saving the planet, has released Hero X in an attempt to get a piece of the pie. You know, the same wonderful “hey, we can make one of those too!” approach that caused Mark Steven Johnson to labor for over 25 minutes creating the masterpiece Daredevil in the wake of Spider-man’s box-office success. This thinking isn’t as destructive and horrifying as, say, the Nazis’ thinking, which led to the deaths of millions, but it has led to the creation of Amped Snowboarding, Blue Stinger and dozens of licensed kart racing games, so it’s almost as bad. 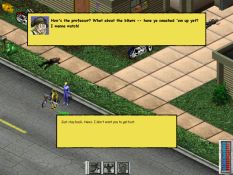 Unfortunately, the only response you can give to this annoying kid is "Just stay back, News. I don't want you to get hurt." I'd rather get all the bikers together in a group, then point to the kid and say "This kid says that bikers are fags and Motorhead sucks!" and run away.

Upon starting up Hero X, the first thing you get to do, and by “get to do” I mean “are probably being forced at gunpoint to do”, is create a superhero. You get to scroll through a list of several stupid-looking costumes, and while the stupidity is mostly distributed evenly throughout the various costumes, the “bat-wing-looking-thing” and “huge droopy cape” costumes seem to have unfairly received a disproportionately high level of stupidity, which is an unfortunate balance issue that will hopefully be corrected in the next patch. You can also set your hair, skin, costume and accent colors, and since the massive number of colors you can choose from is in excess of 15 (but not in excess of 16) you’ll be able to come up with a lot of fruity color combinations. The default guy in the character editor may look pretty fruity, but what’s amazing is that every single possible costume/color permutation looks equally fruity, just in slightly different ways.

You also have a wide variety of totally bitchin’ rad superpowers to choose from, but you’re not going to read about them here. No, to check those out you’ll have to move your cursor all the way over to the “Next page” button and click, you lazy non-clicking freeloader. If you have trouble with the concept of clicking on something, just imagine that you’re playing Hero X, although it isn’t a good idea to do that if there are any objects within reach that you can shoot and/or stab yourself with.