Swinger: This is an incredibly easy move to pull off, so long as you're not actually trying to do it. Almost every time you do a helicopter, the gigantic alien breast will start swinging back and forth and result in a Swinger, and if there is no Swinger icon on the screen the game will get pissed off and end your combo. However, once a Swinger icon does appear the actual move will become impossible to do, which will upset you until you realize that it will make you die faster, meaning you can stop playing. 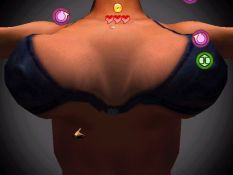 Her necklace seems to be embedded into her body, and it warps and bends along with her strange gelatinous skin.

Bouncer: The most annoyingly difficult move in the dreaded Boob Arsenal, the Bouncer consists of bouncing one of the woman's bloated hambags straight up and down. This doesn't sound so hard until you realized that once you touch one of her massive megatits it takes about a week to finally stop moving, and if the creepy chest-dwelling blob creature is moving at all when you hit it from the bottom it will fly sideways and proceed to swing in circles for the next hour while the game helpfully informs you every two seconds that you were not, in fact, supposed to do a Helicopter.

More curious than the "what" in this case is the "why." Why would someone who knows how to program a game spend their time on something like this? The answer is that they wouldn't, which is why Jere "XMunkki" Sanisalo did it instead. I'm guessing that 12 or 13 years ago when young Jere was a baby, his father watched his mother breast-feeding him and became intensely envious of her ability to summon forth wholesome 2% milk whenever she wanted. He then jumped up and yelled "Oh, I think the baby's getting tired of your milk, dear. Let's mix it with some PUNCH!" before jumping up and delivering a right hook that knocked one breast into a circular swinging pattern and caused the purple icon inexplicably hovering overhead to say "Helicopter!" and evaporate. This planted the seeds from which the idea for this game would grow, although from that point on Jere could never consume any dairy product without first punching it and flipping it around in circles, which became very awkward when eating things like cheeseburgers and ice cream cones. For those of you saying that I'm wrong in this brilliant theory, consider this: No I'm not. 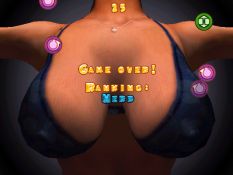 "Ranking: Nerd." Women always say that to me when I hit on them.

As if the game itself wasn't enough, the change log also shows that mod support was recently added. I predict that within a week we will get to enjoy all the requisite mods: a team fortress mod, a team-based tactical mod, a Max Payne ripoff mod based on hong-kong action movies, and 20 or 30 other mods that were all going to be the best thing ever before the team of three people flaked out and decided to go work on other perpetually unfinished projects. But until these inevitable gems come about, we'll all have to settle for the original version. If you're as much of a badass as I am, you will one day graduate from the ranking of "nerd" and achieve the prestigious rating of "juggler", and then celebrate the victory by giving your girlfriend a hearty punch in the chest.