The Official ELEAWTA Newsletter for May, 2003

The seal of quality.

A fond hello to all of our old members, new members, and casual readers! It is my great pleasure and privilege to once again present to you the Official Almost-Monthly-But-Not-Really ELEAWTA Newsletter. When I first started this prestigious group, I never dreamed that it would grow to such large proportions. Even now, as I look at the ELEAWTA roster, I can hardly believe that so many dedicated people would share my vision of hunting down many of the world's most fearsome, yet rarest creatures, beating them mercilessly in single combat, then devouring the corpse, or, in lieu of a corpse, the severely stunned body. Above all, I've appreciated the full reports that active members have sent to me of their exploits. From Don Sliddle's tiger-boxing to Maryanne Hershofsky's ferocious knife fight with a great white shark, it's hard to pick a single greatest story. Truly, this humble organization has grown by leaps and bounds and I could not be any more proud. 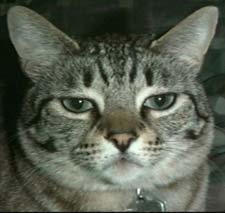 With that being said, I'm afraid that I have to address a few problems that keep popping up before they tarnish our otherwise spotless reputation. Some of our members seem to be having trouble sticking to ELEAWTA's original purpose. We are not here to just randomly destroy and eat any animal we see fit. The animal must fit into two categories: first, it must be an endangered species, and second, it must be able to fight back. I'm getting a little fed up with people constantly writing me to explain how they managed to tackle their gerbil or how they tricked their goldfish. Gerbils are plentiful and goldfish are, for the most part, quite harmless. For the sake of clarity, I don't want to see any more reports like this one from Chris Kimball of New Jersey:

Don't get me wrong, the formatting of this report is exactly what I'm looking for. However, the common housecat is neither endangered nor particularly threatening, hence the terms "common" and "house." If you're going to go after a member of the cat family, please try to make it a jungle cat or some other sort of larger member of the feline family. I don't care how fat it is, you shouldn't eat your own cat. Well, let me rephrase that. I can't stop you from eating you own cat, nor is it my place to try, but if you do choose to eat your cat, I don't want to hear about it. Are we all clear on this? Good. 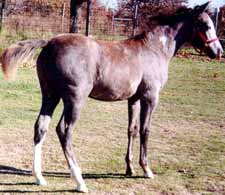 Stressing this distinction between animals that are okay to beat up and cook and animals that are not okay to beat up and cook (at least, not under the auspices of ELEAWTA) is especially important nowadays. We're hearing a lot of talk about horses in the news, what with Funny Cide taking a shot at racing's coveted Triple Crown, and subsequently the ELEAWTA community has been buzzing with debate over whether or not horses qualify. Yesterday, Funny Cide lost the Belmont Stakes to Empire Maker, and within minutes of the end of the race, I found myself flooded with emails asking if it we should eat Funny Cide for losing. The answer is a resounding no. We do not eat animals to teach them a lesson, even if those animals do screw up on the long turn and cost me three grand. The obvious follow-up question, then, is should we eat Empire Maker to preserve his posterity in cookbooks for all time. Well, that's a little closer to the preservationist mission of ELEAWTA, but the answer is no once again. We just don't eat horses. Sorry to disappoint you.

If it's any consolation, the day when we can fight and feast on horses is getting closer. Of course I'm referring to the Man vs. Horse race in Wales, where a horse beat all of the all-human relay teams in a footrace.

Thirty horse-and-rider teams took on 300 individuals and 60 relay teams in the 22-mile race.

Humans are given a 15-minute head start in the race, which has been held for more than 20 years. 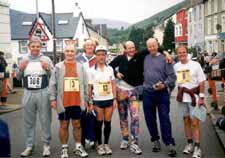 The equine victory sent shockwaves through the Welsh sports world for some reason. Personally, the news that horses are faster than people doesn't really make me want to jump out of my seat. I mean, that's more or less why people always used to ride horses. If people were faster than horses, then the Pony Express would have been a woefully inefficient form of communication. All the same, Wales is now in a drunken uproar over this. In the interest of putting an end to any Welsh rioting and general chaos, I am pleased to announce that horses now fulfill the "lethal" requirement. But before you go off with fork, knife, and chainsaw to do yourself some horse hunting, remember that they still have to meet the "endangered" requirement before you can eat them without having to explain yourself to the police.

Finally, a few of our members have been making the news lately. That's terrific. ELEAWTA could benefit from the publicity. However, there are some sort of publicity that we just don't need. I spend enough of my time writing smart-alecky and indignant letters to holier-than-thou animal rights activists without having to cover for your blunders. For instance, take this recent story:

POLICE have seized 110kg of hair from the tails of endangered African elephants and arrested three Spaniards accused of using it to make jewellery.

The only elephant hair long enough for cosmetic use comes from the tail, so it may have taken as many as 1,000 animals to yield this cache, police spokeswoman Mercedes Martin said on June 5.

The arrests were made last week after police investigating a smuggling ring confiscated the hair and other animal parts at a warehouse outside Madrid.

In addition to the loose hair, officers confiscated 180 bracelets, necklaces, rings and other pieces made from the grey hair of African elephants, classified as endangered under the CITES animal protection accord. 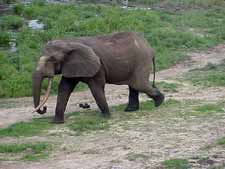 These are food, not jewelry! Got that, Spaniards?

First of all, I would like to say how gratifying it is to me personally to see ELEAWTA members at work as far away as Madrid. Also, I should point out that the African elephant fall well within the bounds of "lethal" and "endangered." I myself have tangled with a fair number of elephants in my day, and let me tell you, anyone who says they aren't a threat to humanity is an idiot. Same goes for anyone who tells you that you can't eat elephant with tartar sauce. It's not just for seafood anymore, my friends! But that doesn't change the fact that these individuals went too far. As president, founder, chairman, and majority whip of ELEAWTA, I want to take the opportunity to formally denounce these Spaniards. ELEAWTA is strictly a non-profit organization. We do not hunt, kill, and eat these animals for the fame and fortune, but for the benefit of society at large. We do what we do so that future generations will be able to say, "Oh, so that's what killer whale tasted like! Now I just wonder what they looked like?" While I technically cannot stop any of you from making jewelry, properly spelled or otherwise, from the remains of your quarry and selling it, I can certainly frown upon it. If you would take a moment to picture me frowning, it would be greatly appreciated. Thanks. 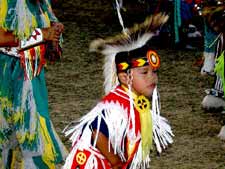 Oh yeah, my goal in life is really to be more like this kid. Give me a break and pass the plastic six-pack rings.

Now, I'm sure some of you are thinking that using the leftover bits of the animals to make jewelry is actually an admirable and environmentally-friendly policy. After all, the Native Americans used every part of the buffalo. As an ecologically concerned organization, shouldn't we be supporting this sort of thing? No, no we should not. The environment is none of our concern. ELEAWTA is about finding innovative and often humorous ways to defeat dangerous animals in combat, not about fashioning crude tools from the leftovers. I defy you all to find a single mention of the phrase, "what we want to do is be as much like Native Americans as possible" anywhere in anything I've ever written. Good luck, chumps. I know for a fact that it's not there, because I just checked, so there. No, what we want to do is be less like Native Americans. After all, if they had such a good thing going, then why are there so few of them left? In fact, they fit the bill for an ELEAWTA target pretty damn well. That settles it. My challenge to you all this month is to defeat a Native American in one-on-one combat, then eat him or her. I expect a full written report, including recipe for consumption. I might even publish the best report in the next Official Almost-Monthly-But-Not-Really ELEAWTA Newsletter.

That's all for this edition, but there's plenty more ELEAWTA action in store for the future. Remember, it's never too late to join! Memberships are free, but donations are always welcome (ELEAWTA may be nonprofit, but I'm sure as hell not). Good luck, happy hunting, and remember, when the authorities ask you just what the hell you think you're doing, tell them you're with ELEAWTA!